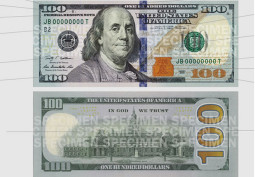 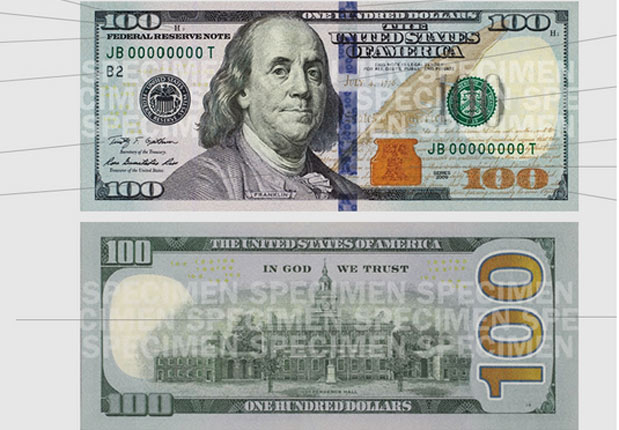 It has been said that the United States dollar is the most counterfeited currency in the world owing to its being almost the de facto world currency. Ever since we adopted it as our official currency we have had to contend with this fact. Most of us have seen a “Chidhuura.” A lot of people have been duped and defrauded a lot of money owing to these. Using modern technology such as scanners and special printers counterfeiters have become quite good at creating fake money. Some of the security features like ribbons can now be seen even in fake bills.

To counter this the U.S treasury has unveiled a new $100 bill which began circulating last Tuesday. This fancy new bill is a technology marvel comes with a lot of new security features designed to thwart the efforts of counterfeiters. Chief of these is a blue 3D security ribbon and an inkwell logo that are reportedly difficult to replicate using ordinary technology. The usual security features such as watermarks and security ribbons are still there. The security ribbon glows pink when viewed under Ultraviolet light. The 3D ribbon is also woven into the fabric of the bill rather than printed on it. The 100s printed on the 3D ribbon change into little bells when the paper is tilted.

The $100 note is the most counterfeited  and the move appears to be a two pronged strategy. Firstly using what has been described by experts as “a monumental leap in security” the Treasury has made it harder to make phony copies of the bill. They have also compounded what is known as the paper problem in the counterfeit industry. Unlike most currencies like the Zim dollar of the yore days, all American dollar bills have the same dimensions. One of the ways which the counterfeiters used to solve the paper problem was to bleach the smaller denominations and use these to print high denominations. So for example one could bleach a $1 and print a $100. By making the $100 unique it is now difficult to do this now.

A lot of people here have also fallen prey to some fake currency fraudsters. This is a commonplace experience in popular places like Mbare, Chitungwiza and KwaMereki were a lot of money changes hands. A friend in Bulawayo has told me that the city has its own share of fake Rands since the Rand is more popular there. It would be nice if the South African Reserve Bank would come up with a similar move to this.

We used to have note changes every other day during the crisis but this is a change that is to be welcomed rather than feared. It is however not clear if and when the note will reach Zimbabwe. If you have seen it please send us a picture and your experience.