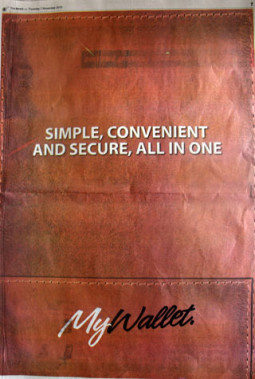 Information we’ve just received confirms that NetOne is the company running teaser ads in the print press in preparation for a re-launch of their OneWallet mobile money service. The re-launch, a source tells us, comes with the introduction of transfers to other networks. So far, OneWallet subscribers could only transfer money to other NetOne subscribers. The launch also introduces a new payoff line for the service; “MyWallet”.

The relaunch will take place at the company’s headquarters in Harare tomorrow.

Aside from the transfers to other networks, the core product functionality remains the same, that is it’s going to be SIM Application Toolkit (STK) based. Being STK based means subscribers to the network have had to trade in their Sim cards for new ones that have the memory capacity and security required for the service. This, it has been suggested in the market, has had a negative effect on the adoption of the service. The upside of STK is the added security, and ofcourse simplicity in navigating the menus and transacting.

It will be interesting how the brand refresh will affect adoption of the service. So far, Econet has the lion’s share of the mobile money services market with its 3 million strong EcoCash subscriber base. The OneWallet brand refresh comes as Telecel, the second largest mobile operator in the country by number of subscribers, prepares to launch its mobile money service called Telecash. It could be NetOne was encouraged to create some news around OneWallet, so they are still visible as an option.