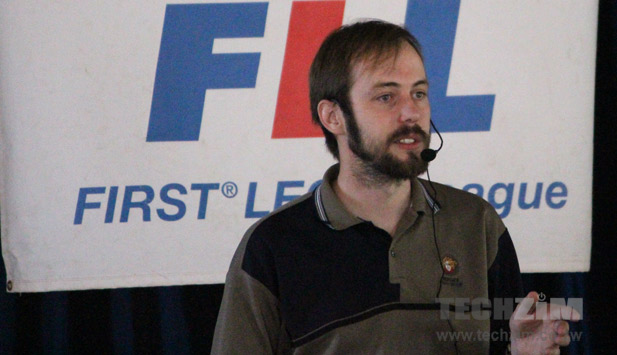 For those of you that have been wondering (and asking) about the people behind last week’s school Robotics tournament, this will answer those questions and more. We interviewed Kenyon Stamps, the founder of the Trust for Education in Science and Technology (TEST) who are the coordinators of the FIRST LEGO League tournament in Zimbabwe. We talked about his background in engineering, what they are working to achieve with TEST, as well as the future of the Robotics initiative.

Some background to FIRST Lego League Zimbabwe. How did it start?

FIRST LEGO League was brought to Zimbabwe by three engineering parents Mr Chikiwa, Mr Nyamakura and Mr Chipunga in 2009.  They poured in a lot of their personal money to make the first tournament happen with 10 Harare schools in 2010.  Unfortunately they struggled to sell the idea to local schools to get it to take off, this partly due to their busy work schedules. In 2011 I joined as a volunteer to them to help organise the tournaments.

I have noticed the shortage in Zimbabwe of knowledge in advanced technology areas and development (the brain drain). In response to this my business partner and I have started an initiative to promote and increase the knowledge and skill level of technology in the nations’ young.  This initiative run under the PVO called T.E.S.T. (The Trust for Education in Science and Technology) is designed to develop and support fun STEM based activity amongst the youth, FIRST LEGO League is the first of these programmes we support.  The FLL programme is a well-established international competition  and aims at 9 –16 year-olds.

Other FLL Zim related initiatives… I remember you mentioning coaching people in telecoms stuff? Any initiatives for older people?

We are also looking at having the trust manage amateur radio training.  Amateur radio is a hobby licensed by POTRAZ which gives people the opportunity to experiment with telecommunications, communicate with other radio “hams” around the world and provide emergency communications to society especially in natural disasters.  U.S Radio Hams are the few people with the license and capability of setting up worldwide communications anywhere in a matter of minutes (or hours if travel is needed) and without infrastructure like that of “ZESA”.  Amateur radio is also the social comms system astronauts use.

Before the trust (T.E.S.T>) I had started a Robotics Club at HIT and begun preparations for a university-level robotics competition. This club, although the competition is not set up yet, has shown positive results in improving HIT engineering student’s skill levels in more advanced systems.  The students also help as volunteers at some FLL tournaments and school training sessions.  We hope that the trust will drive this university robotics competition in the future.

What the challenges have been with FLL Zim and how you have overcome those that you have?

Funding and finding reliable organising committee volunteers have been the major, major issues.  We are working on overcoming these by looking into better recruitment processes, having experienced organisers and PVO board members and by approaching potential sponsors.  Another major problem is that I am the major driver, it is hard to see that this will continue if I were to “drop it”.  It is a passion of mine, i want to see it work and I have the moral support of many parents, kids and  volunteers.  However, the fact that it takes up much of my time makes it difficult to focus on earning an income and developing our separate start-up company… this is a danger to the future of the initiative.

Your plans for the future (both FLL Zim and other initiatives)

I think i have partly answered this already. For FLL Zim we want to have at least one tournament in every province and most importantly get more privileged school teams to support and mentor the less privileged schools.  We want to link all ages from all classes and all races to work together and have fun together learning about life skills, science, engineering, technology and maths.

We also hope to provide kids and university students the opportunity to communicate and travel internationally to meet other kids and professional scientist and engineers all over the world to see their work and maybe bring some more advanced skill and knowledge back to Zim.

In our modern globalised economy STEM based knowledge has become key to success of any economy with international links.  Any modern economy wanting to enter a global market has to meet very tight constraints, some of these require advanced technologies to help meet these constraints – i guess you could call it industrial and business optimisation.  I am not an economist but i believe that if Zimbabwe can depend less on international companies for industrial automation and systems with other technologies such as business software, we can reduce exporting of cash.  One major problem we have is that we send Zimbabweans overseas to study at good universities and many don’t come back.  If we raise the national standard of technological knowledge amongst the young whose to say that Zimbabwe won’t benefit?  Many countries have had software programming curricula in schools – how many school in Zimbabwe have programming subjects?  Many solutions come from outside Zim, why can’t they come from inside Zim?

A little about yourself. about 100 words of what your background is all related to engineering and these initiatives you’re doing

I am a Technologist (a person who uses scientific knowledge to solve problems) born and grew up in Harare.  My interest in engineering, specifically electronics, started in high school at Prince Edward School.  The Zimbabwe Amateur Radio Society introduced a “Radio Club” where we learned about radio communications and how to build our own two way radios with which we can communication worldwide.  We could even communicate with astronauts on the ISS.  After school I started civil engineering at NUST then moved to Pretoria to study Electronics.  I became top engineering student in 2007 and won the Chancellor’s award for outstanding academic achievement.  My Degree project involved using image processing to track mineral particle trajectories in a mineral density separator.  I later studied for a double master’s degree in digital technology and signal processing (MSc and MTech in Electrical Engineering).  My MTech project involved the design of a Brain Computer Interface to enable severely disabled patients to operate a wheelchair through “brain waves”. I returned in 2011 to Zimbabwe to lecture at the Harare Institute of Technology (HIT) and am now a business entrepreneur (or Technopreneur as those at HIT like to say) but no longer affiliated with HIT.