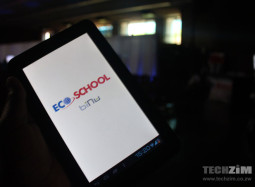 We’ve just arrived at the EcoSchool event in Harare, and fortunately got a chance to check out the EcoSchool tablet before the event. Ok, so the first thing that came to mind when we laid our eyes on the EcoSchool’s tablet is this: Mazwi.

Not that they cloned it. No, you can’t clone an unlaunched product. But aside from the school aspect,  most else (concept and some of the partners) does bring Mazwi to mind first. Maybe they partnered Mazwi too, who knows? We’ll clearly find out in a bit though. Update: not partners.

So anyway, here’s EcoSchool as we have seen it so far. Keep in mind the launch itself hasn’t been done yet, so we’ll probably update as we go.

And here are some pictures: