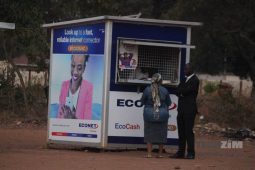 Econet just sent through a press release whose main aim seems to have been to encourage EcoCash subscribers to ask (they could have as well used the word ‘demand’! ) that their employers pay them via EcoCash. The release underscores 3 other items in addition to this:

EMPLOYERS TURN TO ECOCASH FOR PAYROLL BECAUSE OF LIQUIDITY

The number of companies using EcoCash to pay their workers has risen dramatically because of the liquidity problems facing some banks.

Econet executives responsible for EcoCash said they had seen a sharp increase in the number of companies paying their workers using EcoCash Payroll. This was because more and more companies were realising that this is the only way of guaranteeing that their workers will get access to their salaries and wages.

Chief Executive of Econet Services, Darlington Mandivenga, said: “Last month (January 2014) we saw an 82% increase in the number of companies using EcoCash Payroll. People who are paid first by EcoCash Payroll are guaranteed access to their money. If they then want to move some of it to a bank, it is up to them, but it is important that people know they can get their money. We guarantee that you will get access to your money.”

Mr Mandivenga also said that Econet allows its agents to access liquidity support through Steward Bank if they ever run out of cash.

“We are the only operator who has the capacity to pump cash into our agents to guarantee that money is available when you need it,” said Mr Mandivenga.

Mr Mandivenga also advised people who have had problems getting access to their salaries at banks to ask their employers to rather pay them through EcoCash Payroll.

“My advice is that people should go to their employers and give them their EcoCash details for next month’s salary. There is really no need to wait,” he said.

6 thoughts on “Ask your employer to pay you via EcoCash Payroll, says Econet”