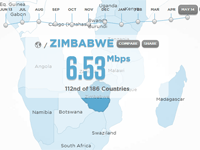 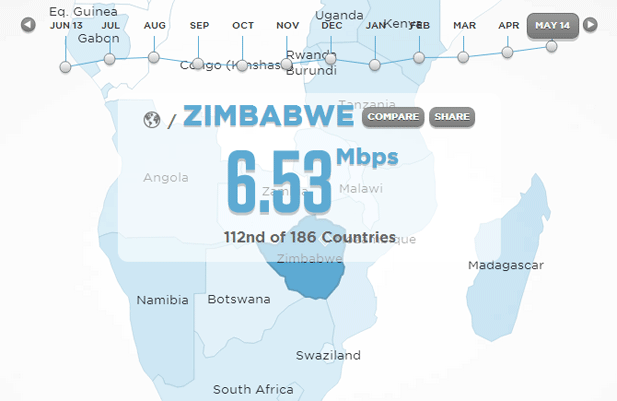 Zimbabwe’s average local broadband speed has reached a new high of 6.5 Mbps in the month of May according to NetIndex. Before now, the highest average ever reached was 5.8Mbps. Local broadband speed, loosely explained, is the rate at which one can access internet content from a locally hosted website or app.

This new internet speed ranks Zimbabwe among the countries with the highest local broadband speed in Sub Saharan Africa with only Ghana, Kenya, Namibia and Madagascar ahead who have 7 Mbps, 7.2 Mbps, 10.4 Mbps and 13.2 Mbps respectively.

Other countries in the region – South Africa, Angola, Zambia, Malawi, Tanzania, Mozambique and others – all have local broadband speeds below 5.5 Mbps in the month of May.

Zimbabwe’s improvements in local broadband speed can largely be attributed to the continued growth of fibre networks in the country with companies like Liquid Telecom, PowerTel and Telecontract all doing Fibre to the Home installations.

NetIndex’s ranking of all countries globally can be found here. The NetIndex speed ratings are determined through speed tests done by internet users on its website speedtest.net. The system uses a server closest to the person doing the tests and currently in Harare, ZOL and Dandemutande servers are used. In Bulawayo and Mutare, ZOL servers are used.

The data provided by NetIndex has some caveats though. For example, it depends on how many people have done the tests and what internet speed they have. So for example if everyone testing their broadband has a good fibre connection, the NetIndex may calculate a misleading average broadband speed for a country.

High local broadband speed means that local internet-based companies and startup entrepreneurs would benefit more if they hosted their apps and content locally. It also means that international websites that have local caches (like Google’s YouTube) are able to leverage the fast local broadband. Content hosted internationally however faces the problem of travelling a longer distance before it gets to internet users, resulting in a slow web browsing experience generally.

High speed broadband has brought a huge positive shift to how business is carried out locally, how people learn, how health services are provided, and most importantly is an opportunity for new enterprises and startups based purely on the internet. Next week, on the 6th of June, such opportunities will be discussed at the Broadband Forum to be held in Harare. Speaking at event is the MD of Liquid Telecom, the CEO of Dandemutande, Senior Executives from Econet Wireless, TelOne and other companies. You can read more and register for the event here.