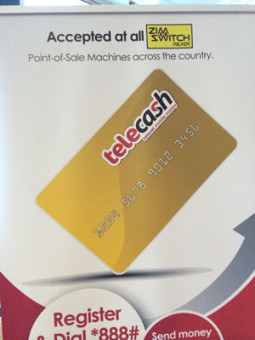 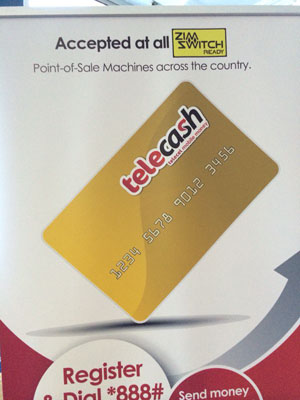 Dubbed the Telecash Gold Card, it allows Telecash subscribers to make transactions on all ZimSwitch POS terminals and also enables withdrawals from every ZimSwitch ATM facility.

The card can also be used for the payment of a host of other services that have already been enabled on Telecash such as DStv payments and bill payments.

Telecash partnered primarily with CBZ to introduce the service, with other financial service firms being included through the ZimSwitch platform.

Speaking at the launch, the head of Telecel Mobile Financial Services Telecel Nkosinathi Ncube highlighted how the launch of this product was a result of a detailed fact finding process that showed how mobile money would be aided in efficiency by a payment solution that is fast and convenient.

Ncube expressed Telecel’s pride at being the first operator to offer a direct integration between mobile money and retailing services. He also highlighted their long term objectives to integrate the card with international payment options such as VISA and Mastercard.

In the same presentation he also stressed how Telecel is keen on working with developers as they have already opened their API. This has been been received with a huge response and as such Telecel will be integrating individual developers on a case by case basis.

The full press release from Telecel is available below.