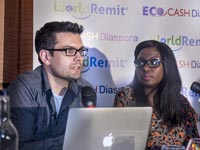 A press release sent out by WorldRemit yesterday says that the EcoCash mobile money service in Zimbabwe now has more than 4 million subscribers, a number just shy of the 50% of the Econet Wireless total active sim cards on the market.

This latest number was mentioned as part of WorldRemit’s announcement that just 3 months after launch, EcoCash destined transactions were now 60% of all WorldRemit money transfers to Zimbabwe. Yes, meaningless without more data, and they sure didn’t give out any more. 60% of how much exactly in money terms or volume of transaction terms. We’ve sent an email to both companies and hope to get a response about that.

That said, WorldRemit is moving at an impressive pace enabling remittances into more and more countries in Africa and Asia. Since the Zimbabwe web to mobile wallet with Econet, WorldRemit has launched mobile wallet remittances and remote mobile airtime recharges in places like Tanzania, Philippines, Indonesia and Thailand. The number of countries users can remit from has also increased from about 35 in June to about 50 now with several countries in Europe, the Middle East and Asia added.