With technology developing faster than ever, you kind of expect older technologies to wane out into the abyss, making way for newer, better technologies. Skype is stepping it up by ceasing support for older devices running Android 2.2 (Froyo, short for frozen yoghurt) and below.

The OS in question dates back to May 2010 when it was first released with speed and performance enhancements in mind. Surprisingly enough, there are still some devices today running on Froyo, accounting for .6% of the market as of this writing.

At the end of this year, Google will be announcing a newer version of Android. Adding even more bad news for earlier versions.

Skype has already started sending emails to people who may still have Froyo running on their devices, notifying users that they will be halting support in a few weeks. Skype goes on to further highlight that users using the said OS will not be able to login to Skype or use the service from their phones. 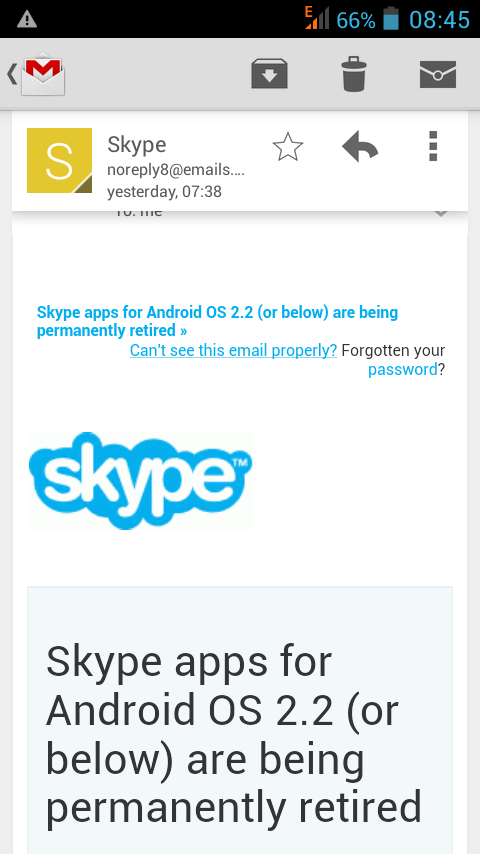 If you have a phone running on Froyo, any Skype activity will have to be through a desktop, laptop, a phone with a later version of Android or any other device with support for Skype.

Assuming you’ve got a Froyo device with some Skype Credit or subscription refund, you can claim your refund by contacting customer support.

So where is all of this coming from anyway? Is Froyo that ancient and outdated?

Taking some time to make an educated guess, I considered how Skype’s parent company, Microsoft, intends on unveiling a purported “selfie phone” early in September.If by any means support for better integration with Skype has anything to do with it, dropping Froyo would just be a conscious decision. There is no way around it.

If you’re running a later version of Android you should know by going to Settings>About Phone>Android Version, to see if you’re on the blacklist.