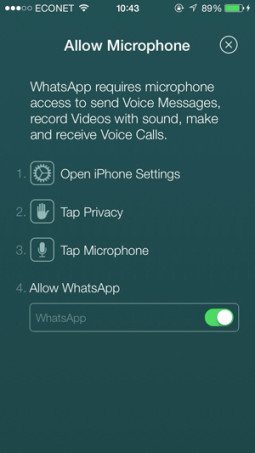 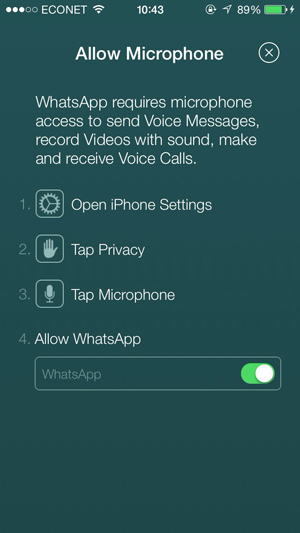 While WhatsApp has been hugely successful and managed to add value to its users with various tweaks, the biggest addition that everyone has been keen on is the voice calling feature. Judging from its latest iOS 8 update it looks like its about to happen soon.

Going the features of the new update(still for iOS only, Android hasn’t received a similar update) there’s a pop up that you’ll get if you haven’t allowed WhatsApp to access the phone’s microphone.

In order to see this to you have to go to Settings, then Privacy, Microphone, WhatsApp and then select the Off switch. When you open WhatsApp the voice call feature will now be visible.

This is fulfillment of what WhatsApp co-founder Jan Koum promised early this year at the Mobile World Congress, even though the service was supposed to be launched in the second quarter of 2014.

While its a great option to have for anyone trying to evade steep voice call rates, the celebrations for the local user are not so emphatic.

Challenges on VoIP call quality have always arisen, with VoIP leader Skype providing what is arguably the most decent quality. Our attempts at Facebook VoIP calls for example were hardly anything to write home about. This of course is also influenced by the quality of mobile broadband.

This brings in the question of how mobile operators will handle the introduction of VoIP calls for WhatsApp. The IM platform has already contributed to the decline in voice revenues, and if VoIP is added to the mix it can only get worse eventually.

The VoIP services have been available through other applications but the popularity of WhatsApp in the local market is what makes it a major concern for the network operators.

There is likely going to be the need to re-evaluate products like the WhatsApp bundle, since $3 a month will mean unlimited messaging and a call service tied into that one bundle. Whichever way it plays out in the end though, the WhatsApp voice call feature that’s around the corner is going to have a disruptive effect on local communication.