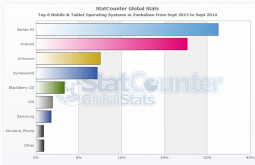 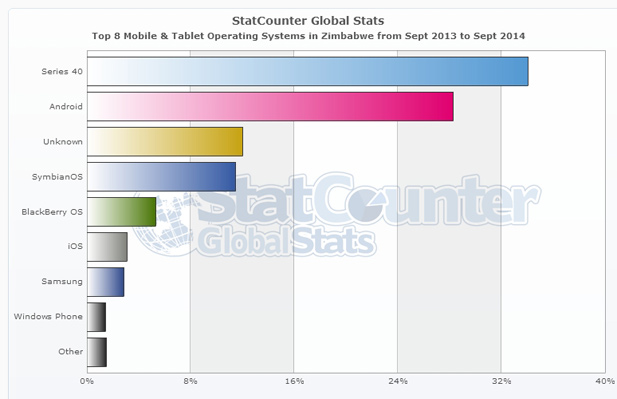 Zimbabwe is still Nokia country, well at least in terms of device and OS market share. According to figures from StatCounter, for the 12 months ending September 2014, Series 40 devices are still the most widely used with just under 34% of the market.

Android OS is still in second place in with a 27.73% hold of the mobile OS market. This is an increase from previous figures on Android use. Looking at most of the local device distributors the strong presence of new Android ready devices explains this.

Distributors like Econet have been pushing Samsung, Huawei and ZTE devices with various credit facilities and local brands like GTel and Astro are also adding to the Android total. Other operating system figures include Blackberry (5.4 %), iOS (3.04 %) and Windows (1.37%). 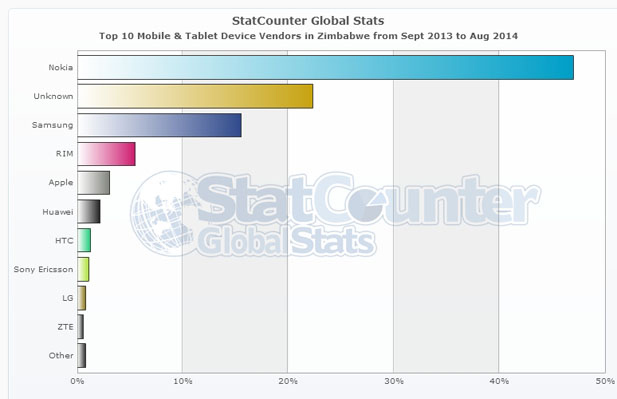 With such a distribution the question for app developers and startups is why start off with Android? The figures definitely show that any app that is Android only excludes so many potential users.

The growth trajectory for Android OS use locally, though impressive, shows that it still has a long way to go before being the undisputed market leader or at least addressing most of the smartphone user market.

To add to this, Zimbabwe like most markets has experienced a lengthened smartphone upgrade cycle, which is the period spent holding on to a device before turning it in for a new one.This cycle is affected by so many factors like disposable income and reduced relevance of obsolete models.

With added taxes on devices, as well as the popularity of cross platform apps like WhatsApp and Facebook that work on devices already held, there isn’t going to be a slew of Nokia C3 and Nokia X2 users dumping their WhatsApp ready phones for Huawei or Samsung just yet.

Wouldn’t it be simpler to just make something that’s cross platform first? Perhaps use HTML5 which is appropriate for the development of mobile friendly web applications that every user on any OS can access.

The information used for this article has been provided by StatCounter. More details on their methodology is available on their site.