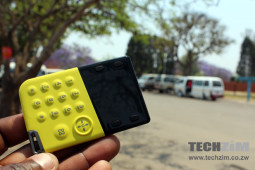 A few weeks ago we stumbled upon an EcoCash card payment system that was being used at an eatery in Harare. The system, which was under some form of stealth test phase, turned out to be powered by Near Field Communication (NFC) technology, as users simply tapped the cards against a merchant device.

Today we came across that same service being introduced in an official pilot launch from EcoCash. The card was being distributed to any willing sign up at selected tertiary institutions which include UZ, Seke Teachers’ College and Belvedere Teachers’ College.

We managed to get our hands on the cards(a product of Singapore startup Nearex) and glean some information about the system.

Dubbed the “Tap and Go Card” it lets users pay for services by tapping against the merchant device which has already been given to some of the service providers taking part in this pilot. The transaction costs are the same as EcoCash merchant costs.

Regarding payment security, the card does not need the EcoWallet PIN for any transactions valued at $3 or less, although they are going to have a threshold for excessive transactions for that nominal value . Any transactions above $3 require confirmation via phone.

Some providers/ merchants that have been opted into this pilot include public transport operators (kombis) and a few other retail outlets which are likely going to be located at these tertiary institutions.

This is a huge step for mobile money payments, with a faster payment process that doesn’t require USSD. As another throwback to card payment tech it follows behind EcoCash’s MasterCard Debit card launched in July.

While mobile money doesn’t need cards fore its primary function, it definitely draws on their familiarity for ease and convenience. It will be interesting to see this sort of tech being extended to peer to peer payments and transfers.

Have any comments and views on this topic? Please share in the comments below.