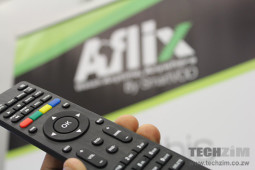 Recently, Video On Demand has been making some moves across the continent and you would think it’s the next big thing in Africa after the Telecoms revolution. In just a space of two weeks, South Africa went from zero to two legal VOD competitors to MultiChoice’s Box Office.

But the rest of the continent has not been left out, a new comer called Aflix has been making moves to corner the rest of Africa with the same content that Vidi and Nodd are currently providing to the South African market alone.

A few weeks ago I had a telephone conversation with Nyasha Mutsekwa, Aflix’s Director for Business Development. At the time, Aflix had launched in Nigeria, Kenya, Ghana and about to launch Rwanda.

Now just a few weeks later, Aflix is said to be now available in 30 African countries and the content has ballooned. In mid-October, Aflix launched an additional “1,000 hours of content from ABC on-demand which will bring our content hours available to about 3,000 hours”.

$2 million war chest is formidable but is it enough?

According to Nyasha Mutsekwa, the anonymous investors backing Aflix have spent “$2 million on content we have invested much more in technology and resources”.

Over the years, African VOD services have failed or at least are off the pace because they have (here’s the word again) failed to buy sufficient content. A case in point is Wabona which has almost retained old, stale content and should be desperately trying to change that.

Aflix is a different story, they have content adequate enough to start but will urgently need to beef up their offering. When I spoke to Nyasha the content was just that – adequate. The Aflix team has content guys in other parts of the world namely New York, Nigeria and South Africa.

It’s apparent that the content team is doing a great job if recent reports are anything to go by. Currently, with 3000 hours of content,  most of which are provided by ABC, Disney, Miramax and MGM.

iROKO, the team that has claimed the title of the “Netflix of Africa” has just over 6,000 titles and only recently started listing Hollywood titles.

Founders are choosing to remain anonymous

From my conversation with Nyasha Mutsekwa, it seems we may not know about the founders except that it’s two people. A Nigerian and American. It is not clear why the founders choose to remain anonymous but one publication says one of the founders is in the Telecoms sector which may impact Aflix with regards to net Neutrality.

Whilst net neutrality is currently a big debate in the western world, Africa is silent and some operators have moved to take advantage. The examples are many, Cliff Central and MTN, Econet and a host of promotions, Liquid and iPidi TV.

I asked Nyasha about this and how it would affect Aflix’s competitiveness and the response was simply  “we are here to compete”.

By this he meant that Aflix has an edge over operators doubling in entertainment because operators are not content specialists. But what was striking is Aflix willingness to bed competing networks/ISPs to counter throttling from a service provider involved in VOD.

“We are also seeking collaboration with service providers in each of these countries to help provide more efficient service”.

But what other choice do they have if the bandwidth pipe is wider on their competitors end? At this stage, for anyone looking to provide broadcast services via the internet, anti-neutrality is just a natural response to Africa’s broadband realities.

Is a war with iROKO brewing?

So far it seems so. iROKO is still the undisputed giant in Africa if you look at the brand, the catalogue and obviously the money (iROKO is reported to have raised over $8 million so far). However, Aflix has irked iROKO a bit.

It all started when Aflix launched in Nigeria and said iROKO of “responding” to their strategy and biggest selling point of making popular Hollywood titles available legally in Africa.

Jason Njoku then responded to by calling Aflix together with South Africa’s Vidi, “Noise makers” and other attacks on the business model that Aflix and Vidi adopted. On the surface this seems petty but there is no doubt that the inevitable is now here. iROKO’s dominance could be under threat and possibly its revered title of the Netflix of Africa (Which Jason disowns now).

Under the surface, Aflix’s main strategy has been to counter iROKO’s big selling point. Until recently, iROKO touted its status as the biggest source for Nollywood movies (and it still is) but now they say “Unlimited access to over 6000 movies & TV shows from around the world”.

iROKO’s shift could be a deliberate move to counter Aflix’s (as well as Vidi’s) differentiation of “focusing on premium Hollywood content” . If iROKO is now doing this as well, what happens to Aflix’s value proposition?

When iROKO started, the strategy was outward looking as they provided Nollywood movies to the huge African diaspora market scattered across the globe. The strategy paid off and now iROKO is available in 170 countries. Aflix’s approach is inbound, they want Africans to buy Hollywood productions legally.

This could be a scary proposition but research Data shows otherwise. In 2013, a Norwegian research group called Ipsos reported a dramatic fall in pirated films and movies from 260 million in 2008 to 120 million in 2013.

The report ascribed the decline to the rise of “legal alternatives such as streaming service Spotify for Music and Netflix for film, which offer consumers a more reliable experience than peer-to-peer file sharing sites”.

In short, there seems to be a link between a decline in piracy and the availability of legal and affordable alternatives that Aflix, iROKO and Vidi are already providing in Africa.

But is Africa ready for legal alternatives? Reliable broadband is still an issue, pricing of content is falling but not across all VOD providers and there is still  lot of work to be done before VOD providers can secure content quickly enough, ahead of bootleg masters.

Aflix has started really well and they are here to stay.  Although Mutsekwa says the Aflix App had been downloaded 50,000 times, the official Playstore count is at just over 10000, which is still impressive considering the app launched a few months back.

Content has been considerably great and good launch pad. They still however need find a way to make the prize point more competitive. They are more expensive the iROKO and Vidi, and with these two pretty much offering the same content class as Aflix, they will always come up as a better alternative.

Also important is that Aflix has to move quickly to other viewing environments. Right now the app is stuck on Android mobile which limits not only it’s accessibility but user viewing options. I am told plans are already underway to optimise for desktop and TV.

One thought on “Can Aflix compete in Africa’s (now cut throat) VOD Space? Here’s what we know”