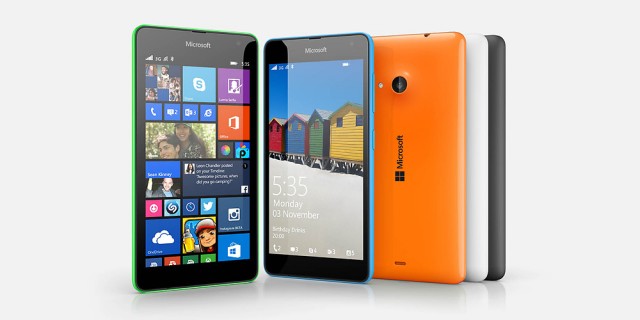 The tech community has been largely anticipating Microsoft to make its shift to mobile that truly felt like the company is really serious about the future of mobile computing, so it made sense when Microsoft acquired Nokia for a deal that struck US$7 billion.

Longtime purists can now see this future as the Microsoft Lumia 535, announced last week, the first ever phone that represents a step in that direction. It iterates from a previous generation Lumia, but this time it doesn’t come with a Nokia branding, meaning this is the first wholly Microsoft device yet.

Interestingly enough, the Lumia 535 doesn’t come with the most high-end internals that you’d think a phone holding this legacy is supposed to have. It is as low-key as it gets, a slightly bumped up 5-inch display that was previously 4-inches, the resolution topped at 960×540 as to the 854×480 of the previous Lumia 530.

The screen is also protected by the latest Gorilla Glass 3 and it now uses an IPS display. In the performance department, the processor remains the same, a 1.2Ghz Snapdragon 200 processor being coupled by RAM that doubles at 1GB. (The internal storage doubles too, peaking at 8GBs)

The largest upgrade to the Lumia 535 might as well be the camera. The rear facing shooter reportedly houses a 5MP standard that may not sound like much but it’s not enough that people will have to worry about. It could cost you a shot or two but it may not be that bad. And a slight upgrade also includes support for autofocus and an LED flashlight.

Even without a word from either company, all signs point to Nokia. And if you where keeping your hopes up that maybe the Finnish company could make a return to mobile phones, think again.

A piece I covered some time ago highlighted how this was bound to happen and now that it has, it can only leave us to wonder how else this could turn out to be.

What was Nokia then is just Microsoft Mobile now, and it’s funny because Microsoft isn’t even marketing this device all that much. It’s almost like a laid back approach to what was once a great mobile phone empire, but it’s Microsoft’s world now and we’ll just have to live with it.

Do you think Microsoft should have thrown everything at this phone, at least for Nokia’s sake? Leave it in the comments below.

13 thoughts on “Details of Microsoft’s first smartphone, the Lumia 535”