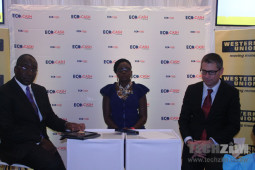 Earlier today we attended the official launch of a partnership between EcoCash Diaspora and Western Union. The service which was already reflective on the EcoCash menu yesterday, had been on the cards for months now.

Western Union is the latest remittances firm to partner with EcoCash after a similar arrangement was penned with WorldRemit earlier this year. Its shortcoming was the limited number of countries in WorldRemit’s network.

The EcoCash Western Union arrangement allows diasporans to send money straight into a recipient’s EcoCash mobile wallet (EcoWallet). There are two ways to do this.

The other option from this EcoCash Western Union partnership is similar to the current Western Union remittance system. A sender receives a reference number that they send to the recipient. The recipient then follows prompts under the EcoCash Diaspora tab found on the EcoCash menu, enter the reference number and the funds will be deposited into their wallet immediately.

Both options come with no added charge for both the sender and recipient beyond the standard Western Union and EcoCash rates.

Speaking at the launch, Econet’s Business Development Manager, Natalie Jabangwe, highlighted the merits of convenience that the service would bring to recipients and the vision EcoCash has for contributing to a cashless society.

This service essentially turns EcoCash’s 15 000 strong agent network into Western Union cash points, not to mention the ability to handle retail transactions with remittances. Its akin to what telecash introduced with Mukuru earlier this year.

The press release from EcoCash and Western Union is available below.