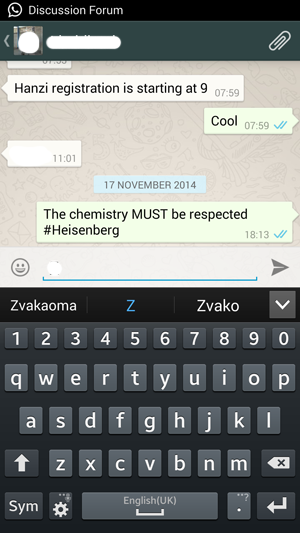 WhatsApp, the famous messaging app released an update a little while ago to its app that received some pretty heated feedback.

It enabled the sender to not only know that their message has been delivered but also that it has been read.

Obviously, the feature itself sparked huge debates over privacy that it eventually coined the term #BlueTick, people even going as far as taking to other social platforms to reveal their rants.

If you were among those people, maybe it’s time to put your insecurities to rest because an update to your WhatsApp is a now all you need.

The update (version 2.11.44), available on WhatsApp’s website, will allow you to opt-in on the feature if you choose to and as shown in the screenshot, will disable the read receipt from showing to others and to you as well.

The update also includes a few tricks up its sleeve for those who have their devices running Android 5.0 Lollipop, which is a new heads-up notification for incoming messages and rounded avatars that contrast the squared icons we’re used to.

The blue ticks didn’t require that you update to get the function but unlike how the feature was implemented before, this time you will have to upgrade to get this added functionality i.e. the added choice to opt-in.

So once again, WhatsApp doesn’t want you to get at each other’s throats. This feature, something I’d like to call “damage-control” wants to make that point clear, but then again the damage has already been done. Why? Because whichever way it is it was there before and now your other half will have to force you to have it turned on because you have nothing to hide, right?

Is this an ingenious move by WhatsApp or should they have considered doing this right from the start? Leave it in the comments below.