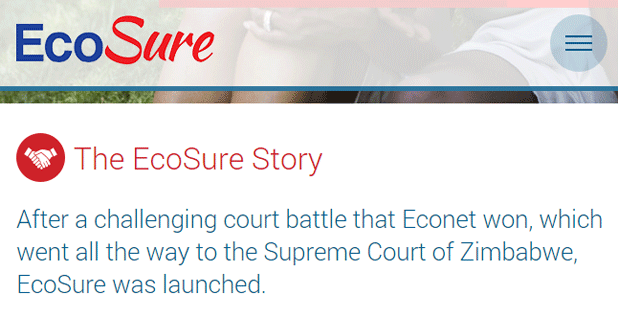 About a month ago, we got information and published that Econet wad preparing to re-launch what used to be (a nightmare) called EcoLife. Today, that product is being officially launched in Harare, but under a different name – EcoSure. This is one product that has taken Econet a long time to deliver both because of the nightmare of it’s previous life, and also, we think so at least, because they were changing the model too.

When we broke the news last month, we’d been told they weren’t ditching the EcoLife name, but that clearly is not the case. As for the model, here’s the difference: With EcoLife you’d get cover for just spending a minimum of $3 airtime a month (Econet liked to call it ‘free‘ cover), where the new EcoSure model is monthly subscriptions that you have to pay in real money. It’s similar to what Telecel launched almost 3 months ago. In model only at least.

The details of what you pay and what you get are on the EcoSure website but here’s a summary:

We mention Telecel in terms of referring to the model only and not in terms of cover. The cover is apples and oranges. Here’s what Telecel offers (every package has $250 funeral cover):

We’re at the event where Econet is launching this product and we’ll update with more details later when we have them.

17 thoughts on “EcoLife relaunches as EcoSure. The new model”