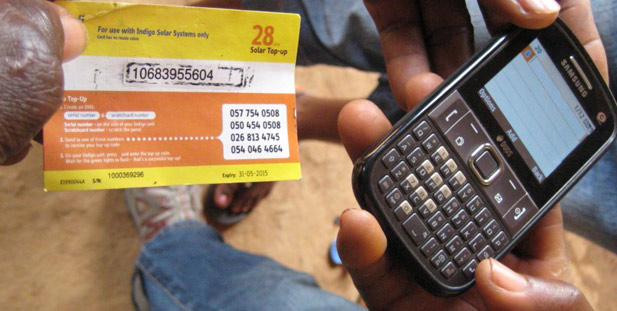 If you’re reading this from Zimbabwe, you’re probably as frustrated as all of us about the erratic supply of power within cities. Yours, ours, is the smaller problem. In the rural areas, most are completely off the grid completely and don’t have a ZESA to constantly vent their frustrations at on Twitter! A number of companies have launched to solve the problem, but a widely used solution locally is still not there, so getting a solar solution is a lot of work researching the optimum solution for your home and making expensive mistakes as a result.

Globally, one of those companies that’s solving the power problem is a UK based company called Azuri, whose solutions have been targeted at African countries. This week, the company signed a deal with a local distributor called TeleAccess, and the solution is called Solar Access.Their product was born out of research at the Cambridge University, and is called Indigo PayGo solar home system.

It works exactly as the Econet product called Home Power Station, which was introduced back in 2012, but is somehow still not visible at all on the market. One gets the solar system installed at their home for free and then they start buying power via a mobile network’s mobile money solution, or good old recharge cards on the street.

The whole concept of paying for solar power only a bit a time is meant to help those that can’t buy the system at one go. After 24 months, the unit is fully paid and one can unlock it and use the sun free. Brilliant model! For those thinking maybe the unit would have reached end-of-life anyway after 2 years, the specs we’re reading say the solar panel has 25 year design life and the batteries 6-7 years.

Here’s a video explaining how it works in a country where the Indigo PayGo solution has been implemented:

In short, Solar Access is just like ZESA, except when you pay for the prepaid power, you get it! We’re assuming ZESA themselves will love this as it means more power available to the heavy stuff that solar can’t carry, like manufacturing. So hopefully Solar Access’s success will translate into less loadshedding.

In terms of timelines, for those keen to rush and get this right now, the target by Solar Access is to get this into some 250,000 homes within the next 12 months. Very ambitious, especially, and TeleAccess has bitten us once already with unfulfilled rollout timelines. But experience is a great teacher so maybe this time execution will be flawless!