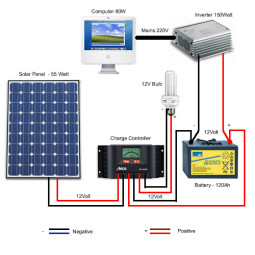 This is part 5 in our series focused on solar power as an alternative to ZESA, and a DIY approach to setting it up.

We have already looked at the basics, budgeting, the panels and the batteries. The only thing remaining are the wires and you should be able to create a functional solar off-the-grid solar system, albeit an imperfect one.

However, as you can clearly see, from the included diagram above, there are more components required if you need more functionality and safety on your system. Wires link the various components together. They are the conduit through which the electricity flows from the power sources (the panels and batteries) to the consuming devices such as the Mac shown in the diagram.

If you remember we briefly touched on a number equations in the previous articles one of which was:

We then used the water analogy to explain this. Voltage is the pressure of the electricity passing through the wires (like water in pipes) while current is the exact amount of water passing through the wires. Resistance is like friction, the opposing force to the flow of electricity. Like friction, resistance “wastes” energy, can cause fires and is generally a bad thing unless it’s happening in your toaster in which case you want it to happen or your plans to have toast would be toast ( I have always wanted to say that.)

Resistance is like friction, the opposing force to the flow of electricity. Like friction, resistance “wastes” energy, can cause fires and is generally a bad thing unless it’s happening in your toaster in which case you want it to happen or your plans to have toast would be toast ( I have always wanted to say that.)

Unlike with friction, there is no special solution such as the use of gels and lubricants to reduce friction in wires. The bigger the current your system is going to be handling the “bigger” the cables you will need in terms of  thickness or number of copper wire strands within the plastic cables.

There are some vendors in the capital who are in the habit of selling small wires encased in thick insulation, these will not do you much good.

Buying wires of the right size/gauge is a balancing act. These thick wires cost more that the thinner ones per each meter. So buying overly large wire gauge for your system will not hurt you in any way but it would put a hole in your finances, especially if you are planning on installing a house-wide solar system.

On the other hand, if you buy cables of a smaller gauge than what your system requires you will risk serious energy losses and your wires might overheat frequently or even cause a fire.

This is the point in the Solar building process where you would do well to consult with an electrical expert, especially in the case of a house-wide system where you might need the help of said expert to do professional wiring around the house. Even the folks who normally do the tubing for ZESA can help you determine the right wiring.

Also unlike in the previous cases were you could just go the Gulf Complex or some other semi-formal market, you would do well to stick with reputable electrical shops, which are plentiful in the area.

Alternatively you could try any of those Solar equipment suppliers. After all, their wires/cables aren’t all that expensive when compared to the informal traders. Plus they are more likely to sell you the right gauge of wire if you tell them your needs or have obtained the gauge you need using the method below.

If you do not heed this advice you will soon learn the true meaning of the adage: Cheap is expensive as you find yourself going to these professionals after messing up your system by trying to be cheap.

As usual the folks at FreeSun power have created the awesome calculator tool that you can use to calculate the wire gauge that you would need depending on your solar budget. Bear in mind that the system uses the imperial system of feet ( who uses their feet to measure distance? Americans are just weird) to measure distance. A foot is about 30 cm in length. When in doubt you can just use standard electrical wires found in most AC systems but these will not be ideal although they will most likely be able to bear the system loads of your solar system.

A foot is about 30 cm in length. When in doubt you can just use standard electrical wires found in most AC systems but these will not be ideal although they will most likely be able to bear the system loads of your solar system.

I will mention this as well during the actual wiring article, but you should bear in mind that it is good old fashioned common sense to buy red and black cables and not buy cables of the same colour so as not to confuse yourself later on during the wiring phase of the project.

Black and Red colors work the same way but it is customary to use red coloured cables for the Positive side of your circuit and black for the negative side.

You could switch these around and still get away with it but soon or later down the road you might live to rue this decision.

Sticking to the norms will help you during both the wiring and diagnosis phase when a problem crops up on your system as any geek who has created code knows, such things are inevitable in any project.

As usual question, contributions and expert opinions are very welcome.

3 thoughts on “Solar Power for dummies part 5: The wires and cables”