What do we remember about telecoms services last year? Well, for one thing Econet Wireless went all out with new products. The mobile network operator seemed to extend its hand to everything from money remittances to cars and water.

What ended the year though was the launch of EcoSure, the mobile insurance product that took the place of a similar but failed product Ecolife.

Two months later, we’ve been told by Econet that EcoSure has registered over 1 million users, an uptake that translates to 150,000 new users every week. It’s a faster uptake than what Ecolife was registering in its first half year back in 2011(1.6 million in 7 months). These are impressive numbers, so what’s the secret behind this? 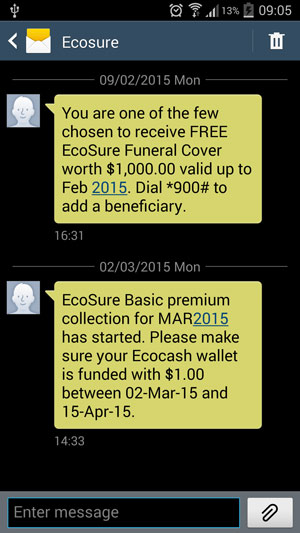 It’s a no-brainer. Micro-insurance products that ride on the extensive reach of mobile telecoms are an awesome idea. EcoSure is solving a real problem, addressing a huge market and they have figured out dynamics like pricing.

These are the same merits that are shared by Telecare, the competing product from Telecel.

However, I don’t think that EcoSure’s steam and this impressive rate of sign-ups is entirely from the strengths of the product.

I was involuntarily “signed up” for the service and had to find out from the mobile network why I had received a notification telling me that I had to keep my EcoCash wallet funded with $1 every month for the EcoSure auto-debit facility to work.

Why should something that has an auto-debit facility be automatically pushed onto subscribers anyway? With more mobile insurance products lined up through this EcoSure model, I wonder how many new insurance services I’m going to be opted into.

You can read the statement from Econet regarding their million user milestone below.

Econet has once again scored a new blockbuster service to follow in the footsteps of EcoCash. In just two months, the company’s insurance service, EcoSure, has registered over one million new customers.

EcoSure has been registering more than 150 000 new customers per week as it emerges as Zimbabwe’s largest micro-insurance provider by customers.

Econet Wireless CEO Douglas Mboweni acknowledged the phenomenal acceptance of the new service, saying it offers the possibility that Zimbabwe could achieve universal insurance coverage before the end of the year.

“We have a situation where families do not have to deal with the shock of unplanned funeral costs after the loss of a loved one,” he said.

The Econet boss also revealed that in keeping with the “Econet tradition” of rolling out many innovations around a new service, plans are well advanced to launch other insurance products.

“We have a massive pipeline of new insurance products to satisfy every need that you can imagine. Some of these products have never been seen anywhere in the world before. We don’t want to spoil the surprise by talking about them prematurely,” he said.

18 thoughts on “A million sign ups in two months: How is EcoSure growing so fast?”