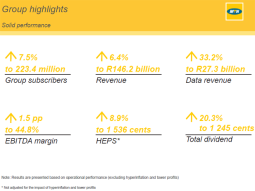 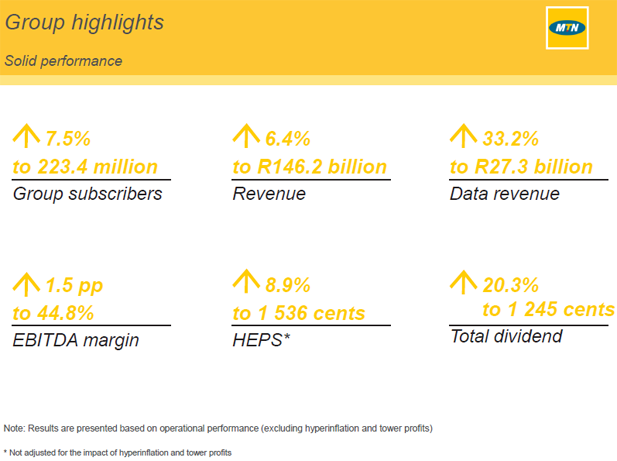 MTN has just started announcing their 2014 annual financial results. The company continued to perform well last year, after a good half year. Total revenue for the year was R146.2 billion up 6.4% from the previous year. Based on today’s exchange rate, that’s US $12.8 billion revenue for the year.

Despite these numbers looking solid and healthy, they show a slowdown in general growth of the company. In 2013 for example the total group subscribers grew 9.8% and the total revenue, an impressive 12%. So yes, growth still, but that revenue growth rate decreased by almost half in 2014. Even data revenue growth slowed down in 2014 to 33.2% from the 41.4% recorded in 2013. Considering data is MTN’s growth driver, it’s slowdown is a problem.

In terms of ARPU, South Africa remains the strong in the groups larger country operations with ARPU of US $8.21 followed by Nigeria with $6.47. Iran, the third biggest operation by number of subscribers, had ARPU of $4.11 in the 4th quarter.

On the subscriber numbers per country, Nigeria remains the biggest with 59 million subscribers, Iran second with 43 million and then South Africa with 28 million.

Onwards MTN expects to continue to invest in data by installing more 3G and LTE base stations. According to the company, Mobile Money will also continue to an important area of growth, as will be the partnership with Rocket Internet in the rollout of eCommerce startups on the continent.

Mobile money wOn the revenue side MTN expects to continue to be affected adversely by the Nigerian currency losses caused by the oil revenue decline.

You can download the full results presentation and data sheets here.