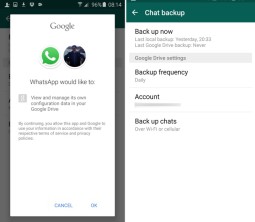 While the iOS users are just crashing into the WhatsApp calling party, those Android folks still have something to brag about to those folks who are on other platforms. As pointed out in an early article as of WhatsApp Android version 2.12.45 there is an option that allows users to back up their chat conversions not just to their phone memory or SD card but to Google Drive as well.

While some may feel the change to be somewhat negligible in the whole scheme of things, I and people like me will no doubt find it to be a useful and even indispensable feature.

Let me give you a background of what I am like in my personal life. I am sort of a distracted person which often means me losing and wrecking a lot of things-“an extremely and incurable train wreck” is I believe the phrase my father put it as he patted me on the back when it finally got through to him that there was very little chance of that ever changing.

This means I have simply lost a lot of phones, I would need a couple of extra hands if I was to finger count the number of times I have replaced my tablet or phone. In High School I never “finished up” any of my pens, somehow they often found a way of escaping from my hands although oddly enough all my laptops have lived well into their old age.

I have therefore enjoyed the convenience of Google Services on my Android devices. Not the least of these Google perks is the ability to save my contacts into the “Google Cloud”.

This means that everytime I replace my phone I can just go to my WiFi connection (you really do not want to let these services anywhere near your mobile data), sign into my Google Account and I can pick where I left off.

After that I will not have to offend my relatives and friends by asking “Who is this?” every time an unfamiliar number pops on my screen. I mean I only know two numbers by heart, mine and my girlfriend’s ( I value my life after all)and my Manyika relatives have memories longer than an elephant’s.

The backup option on WhatsApp has been kind of pathetic for me. I mean what was the point of backing up messages on an SD card inside the phone which would naturally be lost with the phone? The result was I had to go through the penance of asking everyone what the heck they were talking about after losing my strings. Something that never fails to offend my many relatives, especially the rural ones, who can quickly start to feel mistreated and spited.

So to me the Google Drive backup option is worth much more than the useless calling feature which has never even impressed me one bit. In fact despite the phone ringing I have never managed to successfully receive a clear call and still use the trusted Skype when talking to relatives abroad. The calling feature it seems was added so my rural relatives can keep beeping me to death.

How to get WhatsApp Google Drive back up.

As already pointed out the feature has since disappeared from the latest build so I sure hope this future will be fully implemented in future for real.

It will be much more useful in my opinion than this calling nonsense that has everyone running around town looking for WhatsApp calling when it’s mostly not working for the majority of people. It’s actually working, not some antiquated pager feature that WhatsApp calling is being reduced to by people I know.