First impressions of the New EcoCash App: It’s much ado about nothing 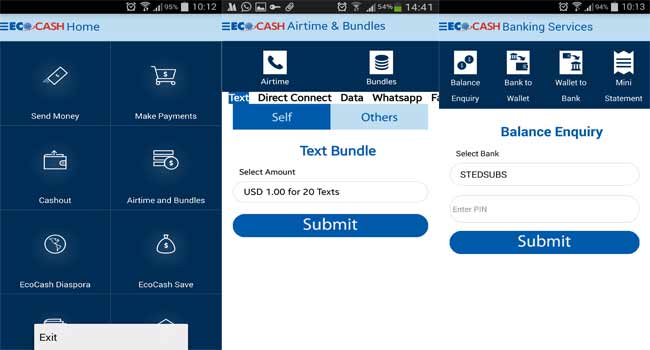 If you follow the not-so-active world of Zimbabwean app development you might have noticed that EcoCash, Econet’s mobile money service, recently released a new app for its bouquet of services. It’s neither the first EcoCash App or its first attempt at this, another EcoCash app already exists in the Google Play Store, it’s just that this one is data-enabled.

So what was the logic behind another app anyway?

From the looks of things, the app, which doesn’t rely on your connection to an Econet network, was probably designed to offer EcoCash services where Econet is not available. It does offer a new dimension to connectedness.

Imagine watching a natural disaster unfold back in your rural home in Tokwe–Mukosi on a Dubai network. You quickly find a phone and call to find out if your folks are ok. You hear they have been evacuated and all property lost. You quickly pull out your phone, log onto your local hotel Wi-Fi and within minutes send your parents a cash transfer via EcoCash to travel to a house in the city. No roaming, no Econet. That is exactly what this new app will do.

It comes with a few positives to what is already available in the USSD version. One feature is the ability to save a biller for future payments. The other is the enabling of decimal amount transactions.

But while it shines with such a value proposition,  there are shortcomings to the app. To begin with, the app’s main icon on the phone is exactly the same as the USSD version. Users who download this new app and keep the old EcoCash app will have a bit of a nag always going for the wrong one.

The app branding is not very thorough. It could as well be a $500 startup project, or made by one of those online free app makers over 15 minutes. That’s hardly what you’d expect from Econet and all its resources and talent.

The menu is just as uninteresting. You have a panel of squares with a blue background and some icons that have no resemblance to the target transaction at all. Examples are the Cashout, Airtime and Bundles and Mastercard virtual menus. This could be inconsequential if you are not considering smaller phone types and visual clarity. Perhaps the team in charge needs to polish it up a bit to add a bit of gloss and intelligent inference.

Some loopholes include a missing “cancel” and “edit” button. Once you enter your details for a transaction, there is no going back inside the app, you will have to rely on the phone’s back button.

Finer things could be added to this app. For example if I have added a biller code, a bouquet and the rest of the information required for a DStv payment, shouldn’t the amount just come up? After all, it’s already set. This is a simple way of safeguarding against typo errors.

The PIN requirement is almost intrusive. It is present at every other bottom of the page. It would be more appropriate for the PIN prompt to come up when a transaction has started processing.

All in all the app seems to have been built out of a certain push, not because it was in its best version. We had hoped for more sophisticated services like diarised payments and bill presentation.

Just like the previous app, the Java, Apple and Windows Phone versions have no release dates yet.

Interesting to note though is that if EcoCash now has a data app, it means an API is now available for all those peculiar third party web and e-commerce checkout applications. We hope for an early liberation date.

All in all, there’s a lot that can be said about this app, but it’s not much to write home about at the end of the day. Who knows, maybe the iOS version will surprise us.