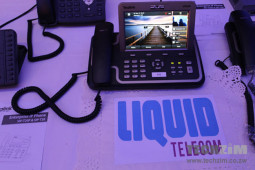 So it turns out the huge mystery from Liquid Telecom wasn’t that much of a mystery after all. A couple of days ago we mentioned the “Next Generation Voice” launch that Liquid Telecom had invited people in local telecommunications to, something that we only understood to be a VoIP service.

Last night, we got a full understanding of Liquid Telecom’s involvement in VoIP, a service that is also being offered by its subsidiary, ZOL Zimbabwe. It turns out that even though both providers offer VoIP, Liquid Telecom is staking a claim to the enterprise market, creating a differentiation that leaves ZOL Zimbabwe as a retail outfit.

ZOL Zimbabwe already has a service line for business, delivering fibre (as ZOL Fibroniks) voice(VoIP) and VSAT. The arrangement presented last night, just puts ZOL firmly in the retail market(small home based businesses are now part of that batch) and lets Liquid Telecom assume the role of enterprise provider for voice data and video.

Liquid Telecom isn’t a newbie to voice though. It has been providing this service to its extensive user list that includes Delta Corporation, The Reserve Bank of Zimbabwe and Nemchem; names that are part of a list of little over 120 enterprise clients.

According to the Liquid team, though it’s not explicitly stated, this assumption of voice services by Liquid has always been the arrangement. Liquid is the one licensed to provide VoIP. ZOL as an Internet Service Provider (it’s not an Internet Access Provider) was providing this service under the auspices of Liquid’s licence. Liquid, as a distributor, can, in turn, lease out VoIP lines to any other ISP besides ZOL.

So essentially Liquid wasn’t “launching” VoIP, so much as it was telling every enterprise that it also provides VoIP and the service can save these clients a considerable amount of money. The presentation made by the Managing Director of Liquid, Wellington Makamure, was largely focused on selling that point.

So if the cost of service remains the same what’s Liquid’s strategic play here? Our assumption is that part of this is Liquid taking a lunge at its one competitor in the market, TelOne. Besides being the second largest holder of a fibre network in Zimbabwe, TelOne started offering a low cost Fibre to The Home service earlier this year, entering the market that ZOL, Liquid’s subsidiary, seemed to have on lock.

Perhaps Liquid wants to take a bigger bite of the voice-for-enterprise market that has been dominated by TelOne? TelOne had a grip on this market with its copper landline network, and this technology will now be overtaken by fibre solutions that bring more than just voice to any premises. As a fibre provider, TelOne has an opportunity to handle that transition for its old enterprise clients that have the legacy technology.

Perhaps Liquid wants to present itself as a better suitor in all of this? After all, a VoIP client is also an internet user who can only stand to use more services as data and video continue to evolve.

When we spoke to Wellington Makamure he emphatically stated that Liquid’s moves in the market weren’t a response to TelOne or any other competitor. Whether you choose to believe that or not, the truth is that competition between the two players looks set to get more intense.

4 thoughts on “Liquid Telecom goes big on VoIP for Enterprise in Zimbabwe.”