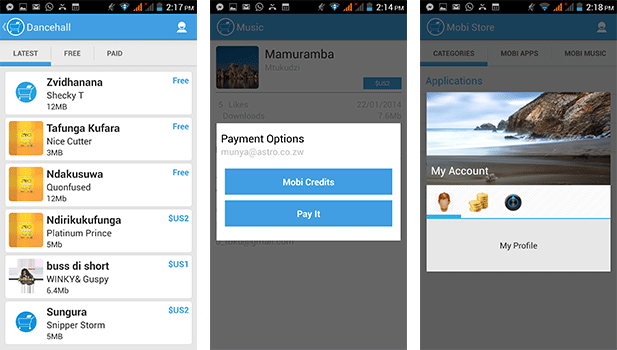 Astro is one company that has constantly made efforts to bring diversity into the market place. These guys have had products like MobiStore, $20 Social Media Phone, Smart TV  and these releases have positioned it for the much-touted triple-play services market.

What I’ve never understood though is how the Astro team fails to implement their solutions and roll them out onto the market effectively. One such solution is the Astro Payit mobile payments card.

Payit is a mobile wallet that is connected to a debit card. An external card reader device plugged into the earphone port to accept payments turns the mobile phone into a mobile POS. The card reader accepts up to 3 track magnetic strip cards.

This means it can accept cards from the major distributors such as banks, Zimswitch enabled cards like the Telecel Gold card, the Ecocash debit card, as well as Visa and MasterCard. Just like any virtual wallet, the actually money would sit in a trust account with a selected bank.

What was wow about in the first place?

The Payit acceptance device brought an aspect of payments that is missing from today’s ecosystem, that is, mobile acceptance. It has proven unprofitable for any investor to distribute mobile point of sale devices to the street, the market of the home mainly due to the cost of the device, the cost of the maintenance and security, the cost of power (ZESA is inconsistent so POS need to run on battery) and the cost of communication (mainly GSM).  The device requires no power, uses the mobile phone’s communication channel and does not require attention as an independent device.

The Payit setup improves the payment experience, a challenge with the current mobile wallets. USSD is somewhere at the bottom of the convenience scale and NFC at the top.

Payit had the advantage of numbers as Astro intended to deploy 10,000 devices at launch and because of its interoperability with the existing  ecosystem, would be offered over 4,500 Zimswitch ATM and POS as cash redemption points.

Where did it fall short though?

Right now we don’t have Payit in the market, so we are tempted to speculate that it’s weaknesses were much more taxing than its strengths. Payit from inception had numerous challenges lined up before them.

Firstly EcoCash, with its shortcomings, had already established a dominance in mobile payments. It was up to Payit to prove itself more disruptive through convenience and usability which it failed to do.EcoCash in its form does not offer a viable solution for payment acceptance in the informal sector. Let’s face it, who needs a biller

EcoCash in its form does not offer a viable solution for payment acceptance in the informal sector. Let’s face it, with our vendor-driven consumerism, who needs a biller code selling wares on the street? The Payit device might have gone some way in solving this problem, were it not that cash is more readily circulating in the informal markets.

Secondly, while two heads are better than one, in communication two devices are not better than one. The dual SIM phone has put to rest that argument. The same challenge exists for Payit. The card reader cannot function as an independent device and even if it does it would mean that it becomes a second device in your pocket, or even the third if we are to consider people who are subscribed to two or three networks.

Another challenge for Payit is that other than the mobile POS function, it added no further value outside of what is already offered by the Banks and Zimswitch cards, even the recent mobile wallet linked cards. The card itself had become a mere duplication of current payment channels.

The last issue is the fact that the virtual wallet caters for the individual with a bank account. For an SME trader, to unlock value out of Payit they would need to open a sole proprietorship bank account with a debit card. Banking is not exactly affordable or fashionable at the moment.

The need for an Android smartphone application is another shortfall in terms of incentives. One requires a smartphone to be able to use the system. We are not sure whether with new technology they have been able to deploy an SIM application for feature phones as did One Wallet with their 128k card.

In my own opinion, Payit will not successfully break into the payments ecosystem unless they have mastered some formula that we are not aware of. As it is, the payment device would work better as an EcoCash or Telecash appendage.