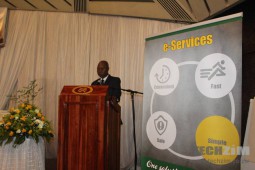 Nobody enjoys doing taxes. Besides the fact that you are giving up money, there are the huge inconveniences that come with the process; from filling out forms, queuing just to make inquiries and also following up on previous payments to verify your compliance.

Everyone has always expected technology to fix these challenges and thankfully our local revenue authority, ZIMRA, agrees. Earlier today, we attended the launch of the ZIMRA e-services platform. The revenue authority was formally introducing the public to its new online system that will handle a number of tax obligations electronically.

This iteration of the e-services platform (it’s still undergoing improvements, some aspects haven’t been switched on) has been primed for Pay As You Earn (PAYE), VAT and Income Tax but it will, at a later stage, address all Zimbabwean fiscal issues. This platform represents part of ZIMRA’s contribution to the national e-Governance drive.

ZIMRA outsourced the development of the platform to Microsoft, and the project roped in the participation of local enterprise company, Twenty Third Century Systems, which administers the SAP solution that ZIMRA has used for a while now.

So what does the system do?

Accessing the system on efiling.zimra.co.zw,  you’ll find options for setting up a ZIMRA eServices account which will carry all your relevant fiscal details. If you or your company are already registered by ZIMRA, the online account will have relevant historical data related to payments made and fiscal obligations.

It’s part of the system’s value proposition; monitoring your account and avoiding the hassle of visiting ZIMRA just to clarify what you need to pay. The system will also simplify BP registration and the filing of tax returns. The e-filing process has been extended to VAT, PAYE and Income tax but it will later include other obligations like presumptive taxes, tax clearances and capital gains taxes.

One other aspect that hasn’t been introduced by ZIMRA is the online payment function. The option is visible on the account page,  but it hasn’t been activated yet. It’s something that ZIMRA has said will be activated after the final aspects of integration are addressed.

At the moment ZIMRA handles electronic payments through traditional banking channels, which will be the same options available first when online payments are made active.

Officials from ZIMRA have mentioned that mobile money payments are also going to be incorporated at a later stage, which makes sense considering the significant monetary movement through these channels. This application of mobile VAS solutions to taxes has already been explored in other parts of Africa and ZIMRA wants to draw in the same convenience with its own platform.

Another aspect of the system that ZIMRA is working on for release in the short term is a mobile app that caters for every aspect of the e-service platform.

ZIMRA has stated that the system will go through additional improvements but it’s worth noting that even at this first stage, the e-Services platform is solving some notable problems. It’s commendable that there is now a huge focus on e-solutions for some of these services.