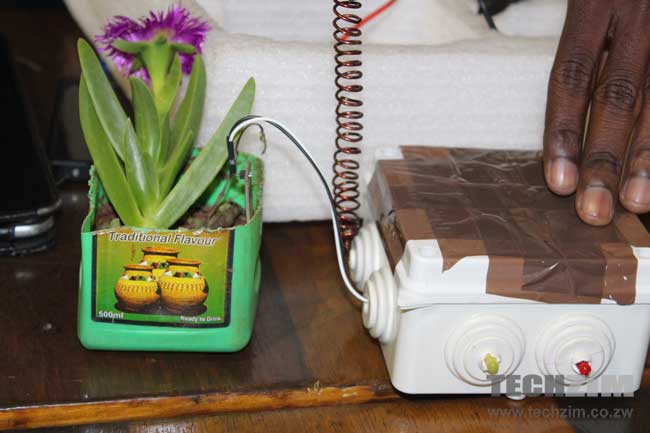 The 2nd edition of the RoboFEST robotics and automation festival that was held recently in Harare also showcased some interesting tech innovations from local students.

The University of Zimbabwe team, comprising of students from the Computer Science department and led by lecturer Michael Munyaradzi exhibited a prototype of a Spacial Variability Irrigation System which deploys automated irrigation and saves water usage.

The system uses soil humidity, atmospheric and plant sensors placed in varying sections of a field connected to transceivers that relay the data collected to a central node. The node is fitted with microprocessors which compare received data with preset thresholds, triggering a valve to open or close water supply. A GSM modem is also fitted to the system to send SMS reports.

The team is currently working on an Android based application to allow a user to override the system with manual triggers or set new thresholds remotely.

This nifty setup is not a new solution as it is used in varying forms worldwide but is unique in that it offers a cheaper method of setting up by use of simple radio and GSM communication. It was made as a solution for new farmers through which they can control water loss. Tests conducted indicate that the solution can reduce wastage of water by up to 30% which translates to lower input costs.

However, considering the level of tech appreciation in the new farmers, most of who cannot afford such equipment anyway, no matter how affordable; it is difficult to picture this as a low-end market solution. It sounds more like something “cell phone” farmers would really appreciate.

The project has received acclamations from the Harare Agricultural Society. Interestingly, in a time where we need agricultural innovation, this system not been commercialised after being around for more than three years.