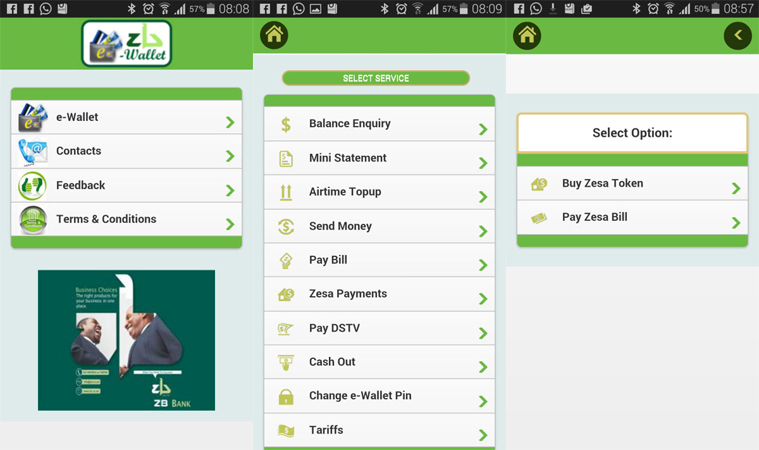 Earlier, we reported how the Nettcash mobile app was the one solution that agents could use to buy ZESA tokens. As it turns out, ZB Bank has been offering this platform for their agents countrywide for over 2 months now.

This only confirms something that I have always said about banks. They don’t make the necessary noise or at the right platform.

Rather than sell the application in itself as a convenient tool, ZB Bank, or any bank would rather talk about mainstream banking at its agencies. Instead of using the ZESA distribution to cross-sell their banking products, they instead use their banking products and users then stumble upon it. The EcoCash model would surely work.

The EcoCash model would surely work as an example of how to cross-sell. EcoCash, as part of Econet Services, works closely with Steward Bank (another Econet subsidiary) and this has seen a crossover with the bank’s product range.

But enough of other products, looking at the ZB Bank app, as convenient as it is, has one major flaw. Unlike the Nettcash App, it is available only for ZB customers as an extension of the ZB eWallet mobile banking product. So an agent, or an individual needs to open an account with them to sell electricity, nevermind the fact that you can sell to anyone afterwards.

Moreover, the ZB app is overshadowed by the availability of the POS terminals at the agents. This is somewhat of a duplication and probably more expensive. It makes more sense to either deploy the mobile app (with the smartphone) and carry the data costs, or the POS terminal with the same costs, not both.

The Android version of ZB Mobile banking app can be downloaded on the Play Store here.

Update: In the earlier version of this article we had mistakenly referred to EcoCash as a Steward Bank service. An adjustment has since been made.