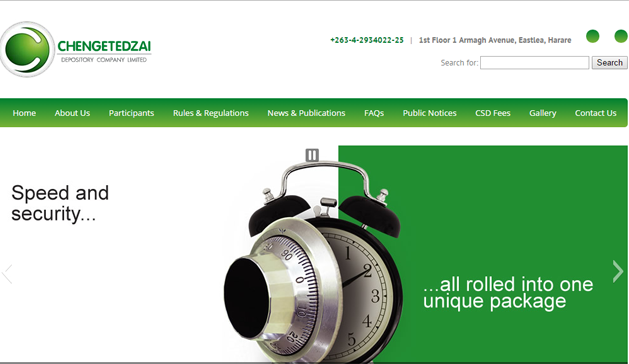 For people plugged into local financial services, one of the highlights of 2015 was the migration of the Zimbabwe Stock Exchange to an Automated Trading System.

This migration was supposed to introduce modern trading practices for the local exchange while opening up the local bourse to the benefits that other global exchanges have benefitted from electronic trading.

There was, however, one other component to this crossover that didn’t attract a lot of attention. A Central Securities Depository (CSD) was set up to handle the backend transactions of this new automated trading system.

Chengetedzai Depository Company was the entity that took on that responsibility and has been maintaining the electronic registration of shares on the Zimbabwean Stock Exchange. It was formed in 2010 to establish and operate a central securities depository for the Zimbabwe securities industry.

Most of its ownership lies in the hands of quasi-government entities like CBZ, NSSA and ZB Financial Holdings and it generates revenue from a levy attached to transactions.

The system used by the CSD was approved from an industry approved service provider, with constant checks, in line with global securities standards, effected to keep the securities held safe from any form of sabotage.

We recently caught up with the team at Chengetedzai Depository Company and managed to get a bit of insight on the sort of role they play in the automation of the stock exchange and what they are geared to do for Zimbabwean securities in the medium to long term.

So what exactly does Chengetedzai Depository Company do?

The Automated Trading System for the Zimbabwe Stock Exchange is designed to give traders electronic access to the trading process (the actual buying and selling of shares), something that, in the past, has been conducted manually. As a result, all these shares that are traded exist in electronic form.

A Central Securities Depository(CSD), in this case, Chengetedzai Depository Company, acts as a “bank for all securities”, maintaining an electronic registry of the shares. This substitutes the old paper certificates system with electronic balances.

Its primary role involves dematerialisation, which is the process that replaces paper share certificates with electronic records of ownership. These dematerialised shares are then tradeable electronically, which reduced the risk of theft and fraud, as well as falsified trades.

According to Chengetedzai, as of the last week of September, 2015, 61 of the 62 active counters on the local stock exchange had migrated onto the CSD, (The 1 outstanding is facing liquidation) with  13,110 trades executed. 31, 625 deposits valued at $1, 42 billion have been processed, against a total ZSE capitalisation of $3.47 billion.

Chengetedzai Depository Company also handles the clearance and settlement of securities, which means overseeing that buyers get their shares and sellers pass on the owed securities to the buyers. This is conducted through the management of accounts with the transfer of securities only enacted after consent has been granted by the account holders.

The system used by Chengetedzai Depository is not directly open to investors, though. The Securities Depository is accessed by licenced custodians who handle the opening of investors’ depository accounts, the servicing of these accounts in addition to the clearing and settlement of accounts on behalf of the investors.

So what lies in the future for Chengetedzai Depository Company?

According to Campbell Vincent Musiwa, the CEO of Chengtedzai, a lot of the work that their company still has to do lies in clarifying its role members of the local securities value chain. Some investors haven’t traded in their paper shares in favour of an electronic system, despite the clear advantages that technology is introducing.

In the medium to short term, Chengetedzai is eyeing the management of fixed income securities, as their role is not limited to equity instruments. Should the local markets evolve further, they are also gearing for a more broadened role.

Other opportunities lie in expanding the ease of information access for account holders and further integration with the Zimbabwe Stock Exchange to allow more options for trading.

With other markets like Kenya incorporating mobile money services in the trading of securities such as bonds, there is still a lot of work that Chengetedzai can be expected to take up in the future.