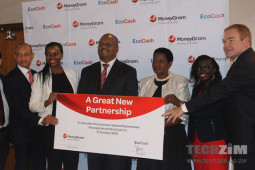 Earlier today we attended the official launch of the partnership between EcoCash Diaspora and the global money transfer company, MoneyGram.

This relationship has been going on for a while now and prior to this official launch, MoneyGram was listed as one of the remittance channels on the Econet website. Today’s event was largely ceremonial, and meat to highlight the partnership itself, sharing information on its value proposition with various stakeholders.

The EcoCash and MoneyGram remittance option works in pretty much the same way as the other integrated remittance services such as WorldRemit, Western Union and Chitoro, as well as its new EcoCash Diaspora service for South Africa. It will complement their efforts and according to Econet, the access to different services is meant to broaden the options that EcoCash subscribers have.

Anyone outside the country sending money to Zimbabwe visits a MoneyGram agent (or uses the online option) and either selects to send via the EcoCash option, or sends the money using the standard MoneyGram format, but sends the reference number to the recipient. This number is then used by the recipient to accept the deposit into their EcoCash  wallet.

Once the money is in the recipient’s wallet, they are free to use it for any ordinary EcoCash transactions, which enables revenue for EcoCash through cash outs or any other Ecowallet use.

This is the latest move by Econet to broaden the cash-flow within the EcoCash environment, with Diaspora inflows gaining importance with the way the local economy is experiencing challenges with liquidity. This issue was highlighted by the guest of honour at the event, Dr. Charity Dhliwayo, who is the deputy Governor of the Reserve Bank of Zimbabwe.

While other mobile money services like Telecash have also explored the same sort of partnerships, they have been as quick to sign on partnerships like the ones Econet is co-opting into its mobile money network.

One would think that both Telecel and NetOne would be moving steadily to do the same, considering that the remittances and transfer service providers seem keen on this arrangement.

Thanks to the amplified efficiency and ease of access to money that is provided by mobile money services thanks to wide coverage and service awareness, the remittance providers stand to accelerate their growth into the market, something that has been highlighted by the success of mobile-first remittance services like WorldRemit.

In the long term this doesn’t look like the only option that EcoCash diaspora can explore. By being tied to the most ubiquitous monetary platform in Zimbabwe, some concept like the direct payment of services which are usually paid for by Diaspora funds (think funeral costs, home construction, fees..) EcoCash Diaspora could be set to tap into other downstream services when the time is right.

For now, all that can be done is to observe how the market takes up these partnered services, and whether there is a huge potential that will be explored soon.