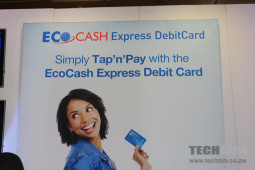 After months of trials, the NFC (Near Field Communication) enabled debit card from EcoCash has finally been launched. Econet officially unveiled it to the public with a live demo of the product at the ongoing Econet “Beyond The Phone” Expo.

The product, officially known as the EcoCash Express Debit Card, or simply as the Tap and Go card, falls under EcoCash and won’t be a Steward bank product only (as we incorrectly assumed). Available to all EcoCash subscribers, it offers holders the convenience of payment at till points simply by tapping against the Point of Sale machine, after which payment will be recognised.

For transactions valued under $5 and up to a daily limit of $100, a cardholder no longer has to enter a PIN number on a Point of Sale terminal. Money can be moved from a bank account into the card, and it supports international payments as it is a MasterCard in its own right.

According to the information shared by Econet on the card, users can buy goods for as little as 10 cents using the card and the Tap and Pay service can be accessed from several outlets across the country that include retailers like TM, OK, SPAR supermarkets and Innscor outlets.

Outside Zimbabwe, it can be used at any point that handles contactless payments for any product under the MasterCard banner. No service charges have been attached to the new card, something that offers an advantage which EcoCash has been quick to highlight, along with the fact that this is the first visible use of NFC payments locally.

However, the biggest point of difference that this card seems to possess comes from its EcoCash DNA. This means that while the technology might be replicated in the short to medium term, Ecocash will maintain an edge with a wide spread of EcoCash ready Point of Sales. According to EcoCash, these are 50% of all the POS terminals in Zimbabwe.

Whoever aims to follow through on contactless payments like other mobile money services or even device distributors (let’s imagine/fantasize Apple or Samsung have an interest at some point) would have to figure out that one dynamic, which leaves entities with alternatives  that might include roping in Zimswitch to help solve that challenge or coming up with a better alternative altogether.

We haven’t used the EcoCash Express Debit Card, but we’d love to get your own thoughts on the service if you’ve had a feel of it already.