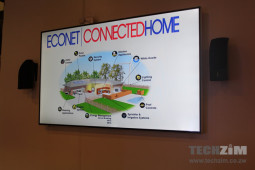 Yesterday, Econet’s Beyond The Phone Expo kicked off, giving the mobile network three days to showcase a lot of work that it has been putting into products beyond voice communication.

Besides the ConnectedCar service which had a huge presence at the Expo, one of the more intriguing presentations was for the Econet ConnectedHome.

This new IoT (Internet of Things) product follows the path of the ConnectedCar which was launched exactly a year ago, and like its forerunner, it offers Econet subscribers remote access to a specific unit. This time, rather than the car, the focus is on the home, through standard smart home technology.

The Econet ConnectedHome works through an integration of smart systems which include;

The system also provides a rapid response service in the event of an actual or attempted intrusion. The entire system can be controlled through the ConnectedHome application or via SMS.

Safe as Houses – The different features of the Econet ConnectedHome

The basic package doesn’t come with the entire set of bells and whistles, though. The entry package will get you motion detection, an alarm system that has the standard window and door guards, a panic button and the Econet ConnectedHome app and/or SMS support. 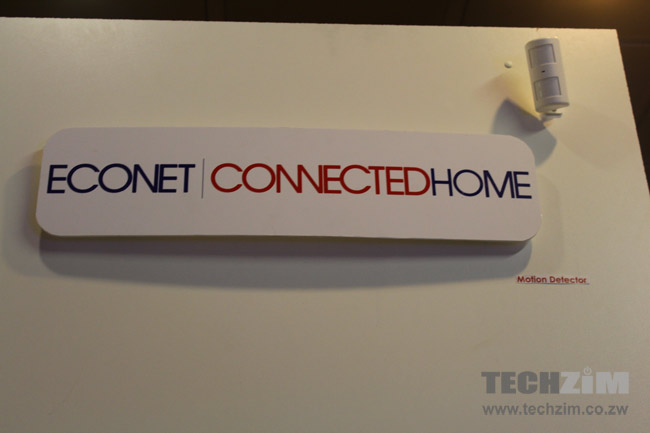 The value propositions from Econet for the connected home are the same propositions which accompany every other standard smart home system. The user is given added control of their premises, security is heightened and to add to the reduction in security risks, there is the huge convenience that comes with an automation of mundane tasks.

It creates a cool home, no doubt, but like all other tech, the questions that arise for the average Zimbabwean consumer revolve around the cost of the service and affordability. It’s a major consideration, seeing that Econet hasn’t designed this product as an elite service. The plan is to appeal to the broader market.

According to Econet, the ConnectedHome standard package is set to hit the market at $75 for installation, followed by a $20 monthly premium for 24 months. After this the systems is all yours, which doesn’t do away with the other consideration which is the data implication.

The more compelling features of the system, like the remote viewing of your home, for example, require good internet access, something which, in the case of the average Zimbabwean, always screams economic ravaging.

If you take away its fly by night (hold on to that pun) broadband promotions, Econet is hardly the model for competitive internet pricing, so you would have to have another plan which isn’t Econet broadband.

Econet’s sibling, the internet provider ZOL, might provide a better argument, though this would mean getting the right sort of package which translates to scaling into Fibre to the Home options that have a great entry price, but as data consumption increases, become a bit steep.

Perhaps a consideration for a special bundle might be the path that the Econet family will have to consider if they want to charge into the homes of more people than just the few that have deep pockets.

So what’s the big plan for Econet?

Check the name of the expo – Beyond The Phone. From the looks of things, all this is more than just a product diversification strategy and focus on short term gains for Econet. Sure, the ConnectedHome and the ConnectedCar can be synced and a subscriber can have a single account that monitors their home and vehicle.

However, the smart money in the medium term is the play on insurance. Econet in one of its many forms is an insurance company and has only started putting out feelers through the life assurance channel.

This beyond the phone concept of securing and monitoring homes can be tapped into for more accurate calculations of insurance premiums, something that hasn’t been offered under one roof by any insurer locally.

Attempts to do this for any other player have meant that an insurer negotiates for a working relationship with security companies, and fleet management service providers. The same can be said for the monitoring of personal health, which Econet, through EcoHealth has roped in even for the first iteration of its ConnectedHome.

If it plays its cards right, at some point, Econet will probably be poised to offer the most comprehensive insurance packages that cut across vehicle, home, health and life insurance.

Beyond that, there could be a gutsy play for big data, something that Econet and other local mobile operators haven’t nailed yet. After all, with a ConnectedHome/Car and a tab on your health, Econet will, through your number, be able to craft the most accurate profile of you. That has a host of possibilities that come after it.

For now though, it’s all in the future. What is available, or rather set for launch any day now, is an Econet powered home security and smart home alternative.

11 thoughts on “Econet increases focus on IoT through ConnectedHome service”