An SMS sent to Telecash subscriber by Telecel today shows the company will soon be selling ZESA prepaid tokens via its mobile money platform. The company is starting the pilot phase of the service and has offered some subscribers a chance to be part of it.

“You have been selected to be part of the pilot tests to purchase ZESA prepaid tokens using TeleCash…” read the message that was sent this morning to some subscribers. See screenshot below. 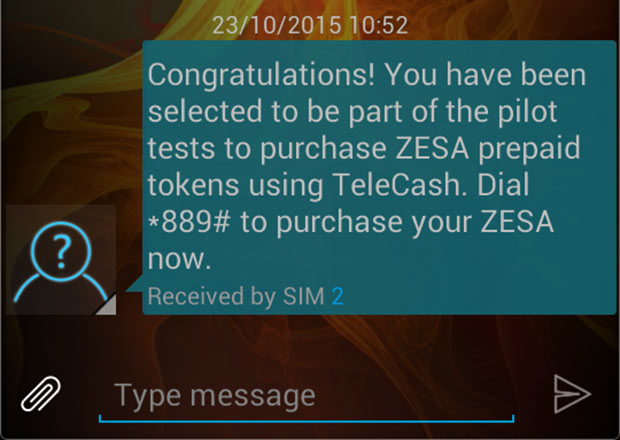 Telecel and Econet have long wanted to sell ZESA tokens via their mobile money platforms. Unfortunately,  ZESA, the national electricity company, chose to distribute the tokens exclusively through other government owned entities like NetOne, TelOne and ZB Bank.

About 3 months ago however, it emerged that NettCash, a privately owned payments company, was selling the ZESA tokens via its POS devices and mobile app, a curious development that we questioned then. Opening up the system to Nettcash seems to have given the mobile operators a better negotiating position.

It’s not clear if Econet has been given the green light too so that their subscribers can buy via EcoCash. It’s likely. Otherwise this would just stink of government deliberately blocking them for no other reason than fixing them for God knows what.

As a Telecash user myself though, I’m glad ZESA has finally relaxed their requirements,  and I can’t wait for this to launch commercially. One less inconvenience to deal with.