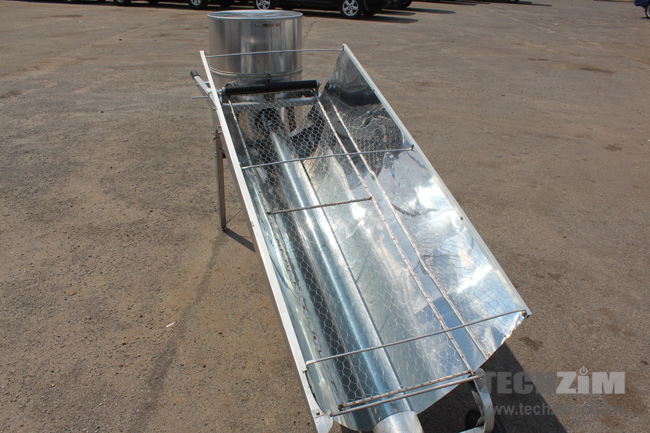 Between mega deals, potential geyser bans and rainfall to remedy the hydro-power situation at Kariba, we’ve been sold all sorts of solutions for the power crisis in this country this year.

Instead of waiting for most of this to take effect, most Zimbabweans have been turning to alternatives within their reach. It’s this attitude that has given prominence to industries like LP Gas, generators, inverters and solar energy workarounds. 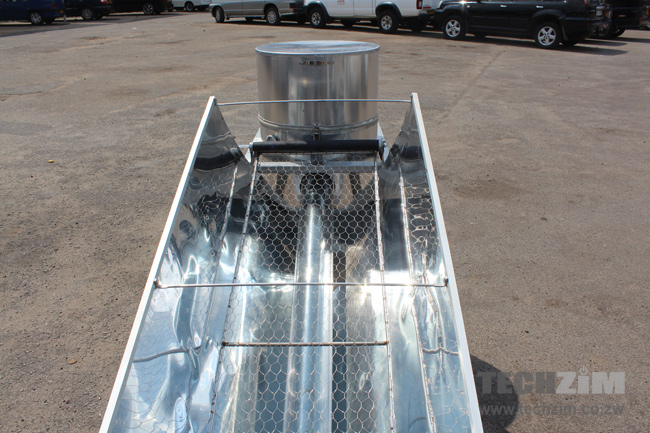 On the solar energy tip, other users are looking beyond lights and geysers. An example of that is the solar stove we came across in Harare. It’s being sold by a local trader, Solomon Marimo, who says he identified this type of solar stove in South Africa and has been trying to create a local distribution line.

Marimo’s solar stove (he hasn’t branded it any sort of way) works on typical solar cooker principles. Reflective material on the cooker is used to capture light from the sun onto a concentrated area.

This light is then converted to heat energy and according to the type of receiver and design of the cooker, the heat is maximised to handle the actual cooking. Part of the design is meant to ensure heat retention.

To do all this, Marimo’s solar stove has a glass tube mounted on an aluminium surface. The tube is then filled with cooking oil, which heats up through the light concentrated onto the aluminium. The heated oil rises to a pot holder where the user gets to carry out their cooking.

When there is limited sunlight, the cooker utilises a miniature rocket stove which is powered by charcoal, (and comes as part of the solar stove though it can work independently) to heat up the oil.

Related designs have been used by other prominent solar stove manufacturers like Gosun, with several other variations that play into different models and stove functionality.

Great solution, with a steep price

The solar stove is priced at $950, a steep price which is open to credit facilities and some form of negotiation. According to Marimo, this high price takes into account the huge cost of assembling this sort of stove in Zimbabwe, which is pushed up by the glass tube which is the only part not available locally.

As a small scale assembler/distributor, Marimo says he hasn’t had the privilege of economies of scale, plus there are no favourable duty and excise regimes for this, even though it can potentially alleviate the power crisis.

Like other solar solutions, this offers a great way to get off the grid, and an option to migrate from alternatives like LP Gas that still require regular expenditure (The solar stove takes in 6 litres of cooking oil which only requires to be changed once a year). However, its biggest barrier is the entry cost.

Perhaps if the model of the stove is tweaked (a hint for folks into Research and Development) and significant support is thrown behind it by a major player like, say, the government, this could become a cheaper alternative.

For those that can afford the stove or just want to check it out, they can always drop in at 1 Julius Nyerere Way, Harare (Marimo’s workshop), and find out if using a solar energy to cook is an idea worth exploring.