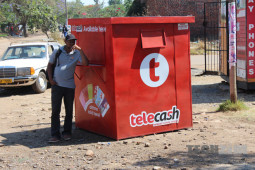 For more than a year, Telecash, the mobile money service provided through mobile operator Telecel Zimbabwe, has been offering a remittance channel through a partnership with South African and United Kingdom remittance service Mukuru.

Like other mobile money remittance services, this channel allows anyone sending money through the primary remittances company (in this case Mukuru) to select an option where the money is sent directly into the recipient’s mobile money wallet.

Unfortunately, the Telecash-Mukuru facility hadn’t been providing instant transfer of funds. Recipients had to wait for hours before the money reflected in their wallets. Now, Telecash and Mukuru have improved the system and once the money is sent it will be recieved instantly by the holder of the Telecash wallet.

This appears to be Telecash’s way of improving the quality of the existing service, which has, in terms of traffic,  benefited Telecel through the volumes that Mukuru remittances have brought to Telecash. In some way, it also reinforces the renewed focus on improved service delivery that Telecel has harping on about.

As beneficial as this partnership has been to Telecel, it hasn’t opened up the Telecash platform to the full advantages that come with mobile money remittances, largely because of Mukuru’s limited footprint.

It goes without saying that by being in South Africa and the United Kingdom, Mukuru has established itself in two of the leading remittance markets for Zimbabwean diasporan inflows and Telecash has benefited from this. However, there are diasporan inflows to be mopped up elsewhere.

Two countries are hardly enough to establish a strong competitive case in remittances, especially when other operators are spreading their wings to cater for more countries and offer more channels in the same leading markets.

According to statements from Angeline Vere, the Telecel CEO, and Arthur Matsaudza, the head of Telecel Mobile Financial Services, Telecel is entering into more partnerships to improve convenience for subscribers, a strategy that will give the company increased revenue opportunities from diasporan inflows.

While a number of other remittance services are being courted with other products being considered, (Telecel was unable to disclose further details), the operator has confirmed that Western Union is one of the partnerships set to be concluded in the short term. This will give Telecash the same access that Econet’s EcoCash has managed to secure through a similar relationship.