In January this year, we mentioned how some developers in India were using WhatsApp as a search engine through a WhatsApp bot. The service has been tinkered with around the world but has been popularised by Indian developers since last year. It has even attracted some users in Zimbabwe.

By adding a specific number to a WhatsApp group or creating one for that number specifically, users are able to prompt this bot for responses to certain queries such as Wikipedia searches that are prompted by typing Wiki.

The solution effectively gives WhatsApp users access to the internet through the Instant Message platform and turns it into more than just a communication platform.

A local developer and tech security buff, Trevor Sibanda, decided to develop his own bot service, called Zimbot. He has fashioned it around content that is specific to a Zimbabwean audience. So far he has been trying out its demo version and gathering feedback from the pilot users to fine tune the bot service.

Just like the Indian bots Zimbot provides responses and content to any WhatsApp group that adds a specific number (for Zimbot its’s +263 738 327418). Group members can then prompt the bot for specific content by entering a certain cue word. Entering “Zim Help”  offers access to all the Zimbot commands which include “Zim News”, “Zim Chat” or “Zim Web”.

The weather service currently provides hourly weather updates for Zimbabwean towns and cities that include Harare, Bulawayo and Victoria Falls.

The Internet browser service gives users access to web pages which are sent as WhatsApp text (from rendered HTML) to the user or they can view web pages as images as they would have been rendered on a real browser.

The last service – the chatbot which has been largely experimental so far, offers limited one on one interaction with one of three inference chat bots. There is still work being put into the service to ensure that it can respond to questions related to Zimbabwean content. 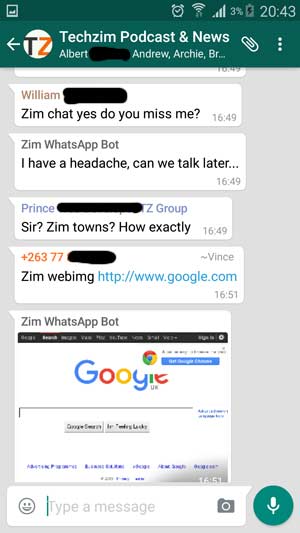 According to Sibanda, the service is being used in 100 WhatsApp groups and has handled over 6,000 resources through more than 55,000 interactions which are measured as responses sent to inquiries and chat session replies.

So far Zimbot has received a lot of user feedback, and Sibanda says a lot of people are impressed and enjoy using the service. He says the chat bots amuse users while the news and weather services are being accepted as a key source of information.

There are some reservations though with one concern being how people are using the browser feature to retrieve image webpages of pornography sites – a development Sibanda says they cannot stop.

Profit and the rest of the internet through WhatsApp

We added Zimbot to one of the Techzim WhatsApp groups and it received mixed reviews with some of the frustrations centred around the nuisance of spam. Other challenges that popped up included the occasional failed execution of commands and a chat bot that is not yet entirely smart.

All these issues, however, feel a lot like the teething of technology that is still being perfected. The value of Zimbot and other WhatsApp bots lies instead in how it can be used as a gateway to the internet.

In Zimbabwe, WhatsApp has an esteemed standing as one of the popular ways to access the internet, something that’s a result of its characteristically cost efficient way to connect people.

At the same time, this has been amplified by WhatsApp bundles, a mobile broadband product that the local network operators rushed to embrace as a way to carve out a revenue stream from the popular IM platform.

The result has been a skewered internet consumption pattern which makes WhatsApp, as well as the other cheap bundled services for Facebook, Opera Mini, biNu and Twitter, the most common representation of the internet and a web experience for Zimbabweans.

It’s this phenomenon which has been the cornerstone of the Zimbabwean net-neutrality argument – a creation of cheaper “internet pockets”  or silos and the passive herding of users who are frustrated by high broadband costs into those same silos.

Through solutions like Zimbot and other WhatsApp bots, the internet experience for WhatsApp users is amplified, albeit slightly, while the mobile operators get to hold on to their bundles strategy.

It’s a crude hack of sorts that caters for a segment of internet users that have a desire for information but are forced to make economic decisions that are also influenced by what the market is offering. Since it does work, it makes sense to make the most of it.

With further improvement, the bots can offer an even wider array of information, something that leaves room for possible cases of monetisation.

Sibanda reckons that this could be an avenue for generating something from Zimbot, especially since there are other service providers who see the potential of such a tool. He says,

We have plans for monetizing the bot, we’ve been approached by several top artists who want a solution to sell their music using WhatsApp, an NGO approached us to develop a responsive chatbot to supplement their SMS program they use to send out medical advice to patients who subscribe.

We are launching an automated system which allows users to pay for content and have it sent to them via WhatsApp. The service currently supports EcoCash and paying using airtime and is set to launch next week. We are experimenting with alot of new features and we created the bot as a proof of concept and are open to any ideas for development.

The opportunity seems very clear to a lot of people. As long as WhatsApp maintains its prominence in the Zimbabwean broadband space and broadband is still expensive, Zimbot and any of its future versions are set to have a huge mark on how people access information.