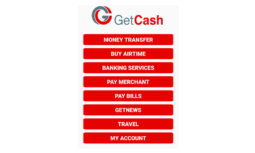 After acquiring Nettcash from Mozido and other local shareholders recently Brainworks is finally moving to rebrand the company in line with other financial services companies it owns.

NettCash has been rebranded to GetCash. In addition to the rebranding, the company may also be planning to closely integrate the mobile money platform to their micro-credit, GetBucks.

The GetCash brand can so far be seen on a new website and a GetCash app which also live in the Android Playstore. The app specifically, is quite interesting, especially in terms of how it brings out the huge potential in GetCash’s mobile network operator agnostic platform. Potential that NettCash struggled to turn into tangible business edge.

The app is so packed with billers that you get the sense the team behind GetCash has been busy at work signing them up since the acquisition: from schools, internet providers, Zesa, ZIMRA, Newspapers, Churches, insurance, City Councils and ofcourse GetBucks loan repayments (more on that in a bit).

Getting a thousand billers and merchants on the platform however is only one side of the chicken and egg problem that all mobile money service providers need to solve. In fact it’s just one half of the one side. Half an egg if you will. The other half of the egg, a more crucial one actually, is the agent network. Without a wide agent network, all this won’t amount to much. And, once the agent network coverage is wide enough, the liquidity of that network.

GetCash has clearly not started showing the new brand on the agent front. Or at least if there are visible GetCash agents out there, I’m probably missing them. Please let us know in the comments if you have spotted any.

On the integration with GetBucks, the logical next step is to have GetBucks credit recipients receiving their money into their GetCash wallets. Logical because, microcredit over mobile money is not new and it’s an asset that GetCash would use especially as it keeps the liquidity in its ecosystem.

EcoCash already has a similar service, providing loans via the EcoCash Save service. The only difference is that GetBucks is a fully fledged profit making micro-credit business so the volume of money it’d bring to GetCash is likely quite significant.

An important distinction to make is that based on available information so far, GetCash is wholly owned by Brainworks where GetBucks is just partly owned, by them with the other large share owned by GetBucks Limited (a wider group of companies that has financial services operations in other countries), and ofcourse a stake publicly owned since the listing.

3 thoughts on “NettCash is now GetCash, as Brainworks prepares to integrate it with GetBucks”