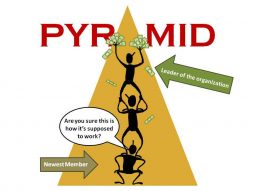 Pyramid schemes come in many guises, but they have one thing in common – they always fail. That is why I was dismayed by the comments on a recent article on that seemed sympathetic to a doomed cause. I will debunk pyramid schemes with high school maths – anyone who took or is taking school mathematics can easily follow.

In a Ponzi scheme, there are two kinds of people,the first are those who do not know what they are getting into and the second are those who do, but hope to earn enough before the house of cards crashes down. This article will hopefully help those that are in the first group, and remind those in the second group that their gamble is unlikely to pay off.

The Legend of Paal Paysam

According to Indian legend, there was once a king who was a chess enthusiast who one day encountered a travelling sage. While encouraging the sage to play him, the king offered the sage to name any reward he would want, should he manage beat the king. The sage won, and had a modest request: he wanted rice, and the amount of rice would be guided by a simple rule: one grain would be placed on the first square of the chess board, and doubled on the next square and so on until the chessboard was filled (1 grain on first square, then 2, then 4, then 8, then 16,and so on). The king demanded a sack of rice to be brought to fulfil this request, but soon realised that a single sack would not be enough!

At this point, I ask that you to stop reading and guess the amount of rice (number of grains) that would be required in total to reward the sage.

The Power of Exponents

The rice legend above is an example of exponents – a topic taught at O’Level mathematics where you raise a number to a given power. If I were to describe exponential functions, I would say they are stuff that grows really fast – due to the fact that the larger the value gets, the faster it grows. Doubling 1 gets you 2 (not much of a difference), but doubling 9 quintillion gets you 18 quintillion, which is a huge difference.

So  what does that have to do with pyramid schemes? A lot, it turns out. I will repurpose the chessboard legend above: if each member of a pyramid scheme were a grain of rice, then each square would represent a ‘level’ in the pyramid. So at level 1, there would be one person (the founder of the scheme, call him Ahab), and let’s say he recruits 2 people for the second level as his ‘downlines’ (Betty and Byron). If those 2 people each recruit 2 ‘downlines’, then there would be 4 people on level 3 (Carla, Caleb, Christine and Charles). So we now have 1 guy at level 1, 2 people at level 2 and 4 people at level 3. There is a pattern here (not just the coincidence with alphabetically convenient names) – we can easily determine the number of people for any given level N using 2N-1. So the total number of members on all levels (1 to N) is given by

This is a geometric progression (also covered by the O’Level math syllabus). It is possible to simplify the calculation for the total number of members of a Pyramid scheme with N levels to

I will leave the proof as an exercise for the reader…

Armed with this knowledge, let us model how Ahab’s pyramid scheme will work out. Let’s assume that each member will each recruit 2 downlines, and this happens only once – a week after they have joined. So we will expect to add a new level every week. Each week number will coincide with the number of levels in the scheme

As you can see from the table above, if Ahab has setup his scheme in a country with roughly 14 million people, the pyramid scheme will run out of people to recruit sometime between week 23 and 24 because every single citizen will be a member by then, and the pyramid will promptly collapse. Another way to look at the table is to see how quickly Ahab and other low-level members will amass wealth due to the exponential growth of their ‘downlines’, which is why despite being illegal, the get-rich-quick scheme remains alluring.

This is just an example, in real life, members are likely to recruit more than 2 ‘downlines’ (which results in the pyramid collapsing in fewer levels as recruitment happens faster), and the average recruitment being longer than a week  (meaning the scheme will remain active for longer than 24 weeks).

E&OE: Please let me know if I made any mistakes in my calculations and I will correct them – my O’Level maths is getting rusty

16 thoughts on “Why Pyramid Schemes are doomed to fail: a mathematical proof”