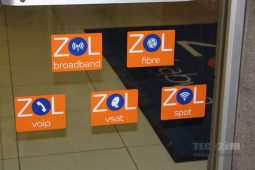 We recently wrote about the ad wars between two Zimbabwean internet providers; the State-owned TelOne and ZOL which is part of Liquid Telecom.

The two telecoms companies are out to mark their dominance in the local internet space and all-out marketing campaigns exemplified by campaigns like ZOL’s recent full page advert are enough to paint a picture of how intense this has been.

It’s not just total market domination that’s spurring the ad campaigns, though. The pursuit of growth plus the need to make the most of extensive infrastructure investments are enough to trigger diverse strategies and some cases of unusual promotion.

For ZOL, which brought this rivalry to the public’s attention in the first place and just put it back into focus with an elaborate ad, it has a lot to do with its own hunger for growth that has been underpinned by an extensive fibre network (the largest in Zimbabwe) provided by its parent company, Liquid Telecom.

The return on the significant investment made towards this (which include more recently part of a $150 million fund secured by Liquid in its cross-continent fibre campaign) has to be met by active fibre connections that are delivered  by ZOL.

So how far has ZOL gone in delivering this and how much work does it intend to do?

At the start of the year, ZOL mentioned that it set a target of 100,000 Fibre subscribers by the end of 2016 a number which appeared to be very ambitious considering the subscriber totals and growth rates that ZOL had shared in 2015.

This was just after it introduced its more affordable Fibroniks suite which has also been expanded through the $29 Fibroniks Lite budget package, the introduction of Fibre in cities like Bulawayo plus high-density areas that weren’t Fibre to the Home catchment areas in the past, and, of course, the aggressive marketing drive.

Add that to the 3,500 subscribers with a fair margin of error and you could assume that ZOL is sitting on 30,000 Fibre subscribers.

The number is nowhere near the 100,000 target so ZOL’s strategy has likely morphed into the chase of existing internet users tapped into a slower/weaker alternative (ie ADSL) and introducing them to its own “cheaper” alternative.

Is old tech like ADSL that big a deal, or a threat?

TelOne has approximately 76,000 ADSL subscribers a number that was supported by TelOne’s monopoly on fixed telecoms which left it as the only provider of ADSL services in the market.

ZOL, which has to figure out how to activate the fibre infrastructure that’s its parent company is laying all over the country, is pushing its fibre service (called Fibroniks) as a superior alternative to ADSL.

This is essentially an attempt to add this ADSL haul or a huge part of it to the ZOL family.

Fibre trumps ADSL. A faster connection with a better case for reliability that has a greater capacity is an easy pick here.

However, ZOL is facing obstacles that include the loyalty that TelOne has been cultivating among customers it managed to onboard onto its internet services (this was before ZOL became the mass market provider that it is fashioning itself as) as well as the impression of an expensive service that fibre has carried for years.

To be fair, ZOL has done quite a bit to address this. So far plays that seemed like they weren’t part of the ZOL/Econet family DNA like the provision of cheaper packages have been made.

Advertising, with all its ingenuity and ability to change the minds of the consumers – however loyal they are to ancient technology – is expected to do the heavy-lifting now.

Which explains those promotions (like the car giveaway through that orange envelope) and of course, shots at ADSL. They also satisfy ZOL’s need to exalt the superiority of its own product.

The effectiveness of this remains to be seen.

However, as subscribers are faced with increasing options for residential internet solutions it might help ZOL and anyone else vying for ADSL users or anyone else with a buck for going online, to focus on exceptional customer care and reliability.

These “outside factors” should actually be at the core of any attempt at differentiation.