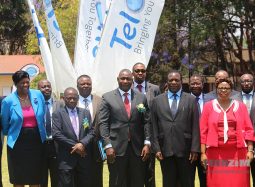 Friday the 14th of October marked the official launch of the Telone-NUST Bachelor of Engineering (Honors) in Telecommunications Engineering Degree. The occasion was packed with an assortment of government officials, dignitaries, heads of parastatals and academia representatives with the guest of honor being the Vice President of Zimbabwe, Honourable E.D. Mnangagwa.

Initially proposed for programme of this nature in 2010.

Programme was altered to Telecommunications and Software Engineering.

In December 2013 Senate at NUST approved the programme.

ZIMCHE came in to inspect in November 2015 and was satisfied with what they saw.

First intake commenced in September 2016 with a class of around 43 students.

Want to know more about the degree programme? Maybe this might entice you.

Degree Program started its First Intake in September 2016 on a full time Basis. This Program is NUST program and TCFL is an affiliate of NUST. Its offered in this partnership arrangement.

2. How long will it take to complete it?

3.What is the application procedure and requirements?

The application procedure requires someone to complete an application form at the Centre or TelOne outlets in various provinces and Minimum requirements are  “ A” Level Mathematics, Physics and any other Science subject.

4. Are you offering full-time programs or you will also run block releases?

So far the intake was full time and plans are there to introduce flexible modes like block release to cater for the working people.

5. How many semesters will there be in a year and how much it is per semester?

There are two semesters in a year for this program.

6. Will the degree be offered exclusively to TCFL or it will it make its way to other institutions?

For now the Degree is being offered at TCFL and the future will always be viewed in line with developments in the evolution of TCFL in terms of satellite campuses and there are opportunities to offer it in the satellite campuses.

During the launch it was stressed by the Honorable Vice President Hon. E.D Mnangagwa as well as by the Minister of State Harare Metropolitan Hon. Mirriam Chikukwa that it is paramount that we have local developers and software engineers working to provide home grown applications that not only compete on the global platform but are also functional and relevant to the progressiveness of the local economy.

The Minister of ICT Postal and Courier Services Hon. S Mandiwanzira also mentioned the Information Age that we are currently in and how it requires growth in ICT field as well as robust and secure communications services.

Will the union of Telone with NUST bring about big value in the ICT department or will it be another case of breeding premium workforce for export? Let us hear your thoughts in the comments.