The IDC‘s report on worldwide smartphone shipments in the third quater of 2016 placed Samsung as the top shipped device worldwide with a total of 72.5 million units shipped against second placed rivals Apple who managed to ship 45.5million units (almost half Samsung) by the end of Q3 2016.

Samsung achieved its figures despite a decline in its year-on-year growth of -13,5%. Apple also suffered a decline in growth by -5,3%.

However, it is not surprising that Samsung topped the list as it has a wide range of devices and variants in the smartphone market. What came as a surprise to us is that the list of top 5 shipped smartphones are dominated by Chinese brands.

Huawei, Oppo, and Vivo have a combined worldwide shipment of 80.1 million units and find themselves in 3rd, 4th and 5th place on the list showing signs of China’s growing influence on the global smartphone market. The Chinese vendors  were the only maufacturers to experience year-on-year growth rates with Huawei at +23%, Oppo at +121.6% and Vivo at +102.5%. 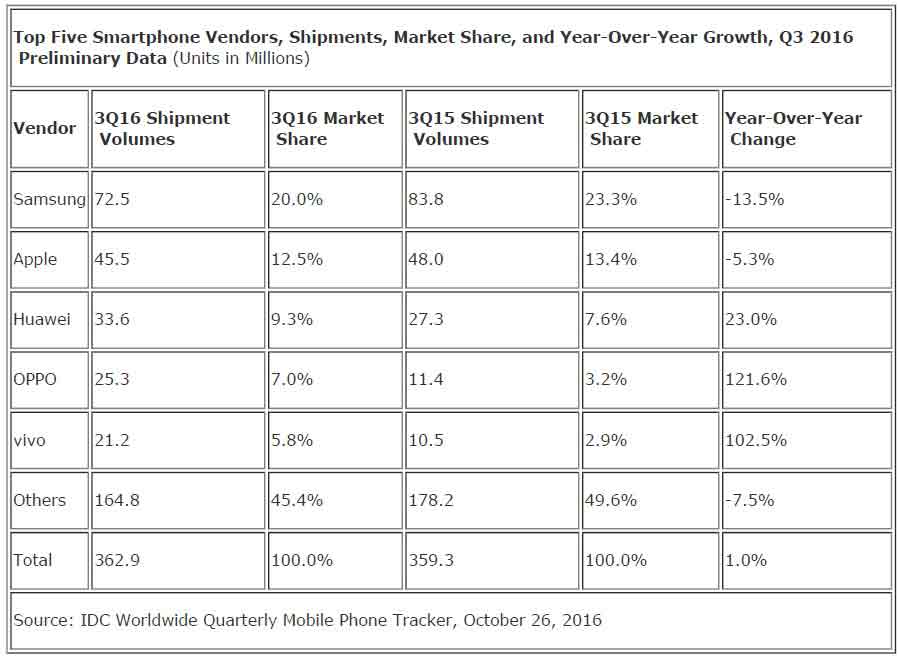 Some key vendor highlights from the report read as follows:

Samsung: The continued success of the Galaxy S7 and S7 edge helped maintain volumes in 3Q16 despite the recall and negative publicity of the Note 7 fiasco. Outside of Samsung’s flagship S7, the more affordable J-series of devices continued to steadily drive volume in both developed and emerging markets with flagship-styled devices across various price points and display sizes. Samsung will need to put the Note series to rest as quickly as possible and look to their S7/S7e to captain the ship and keep Samsung users on board for the long haul.

Apple: The new iPhone 7 and 7 Plus drove third quarter shipments of 45.5 million units, down 5.3% from the 48 million units last year. Higher than expected iPhone 7 Plus demand outstripped supply, which should be alleviated through the fourth quarter, helped by new features such as water resistance, faster processing, improved optics, and larger storage capacities. A new “jet black” color option has also proven popular with many carriers and retail partners are still showing the device on back order.

Huawei: The Chinese giant shipped 33.6 million units, up a notable 23% from last year. The current dual-camera P9 flagship continued to help with its momentum in China despite the higher price tag compared to some of its rivals. Huawei’s Honor brand also found success with the new V8, as the mid-tier device sold well both in and outside of its home country. Outside of China, shipments have grown drastically as China now represents 53% of shipments compared to 60% last year. Huawei continues to maintain a strong brand in Europe and is finding success with the P8 and P9 family, where it is taking away share from Samsung and Apple with competitive specs at lower price points with the Lite versions. Huawei may now have it sights set on the U.S., as we have the New York unveiling of its next Mate series flagship (Mate 9) in early November.

OPPO: In China, OPPO continued to do well largely due to its R9 device that saw continued success in the market and its domestic popularity helped it further close the gap to global number #3, Huawei. OPPO has also pursued an aggressive expansion strategy outside of China, with shipments to the rest of Asia/Pacific tripling since the same quarter a year ago. It particularly experienced good growth in India as it employed more staff to be positioned at storefronts to promote smartphones to consumers.

vivo: On its home turf, vivo plowed more investment into marketing in order to expand its reach via TV advertising, targeting high-tier all the way down to lower-tier cities in China. vivo also held a number of promotional activities and saw growth in China largely due to its X7 series. Its strong coverage in the Tier 3 to Tier 5 cities continued to help it to excel. Outside of China, its presence is still relatively small, but it managed to double its shipments quarter year over year in 3Q16. In India, it grew by increasing its marketing investments to expand its reach via television advertisements

The Chinese innovation model allows its manufacturers to create “local” devices which they use to gather feedback from an already large local consumer base to then create better products. By the time a Chinese device goes on to the international market it may have 3 or 4 predecessors allowing the vendord to perfect designs, software and hardware features of the device based on valuable customer feedback. So not only are they able to push massive volumes, the chinese have created a model that allows them to create flagship devices that compete with iPhones and Galaxy devices while keeping their local consumer base happy, not to forget that the devices are usually competitively priced giving consumers more value for their money in specs.