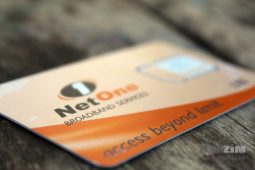 The Techzim team (except for one die-hard Econet loyalist) has been on Net One and subscribed to its One Fusion product for more than a month now. Some team members had long since acquired Net One lines and subscribed for One Fusion but it took a bit more convincing for me to try it out.

I finally got a Net One line at the beginning of December 2016 and this has been my experience so far.

I bought my line at NetOne’s shop in Westgate for $0.50. I was given the option to replicate my Econet number so I simply replaced 0775 with 0719. Having experienced NetOne through our speed test exercises I immediately asked for it to be activated for LTE (4G), I was told it was LTE activated but it never showed, I waited a few days (was in no real hurry since I’m always on wifi) and it still didn’t connect to LTE.

After contacting NetOne customer support LTE finally connected on my device (which is fully compatible with Zimbabwean LTE). Once I was sure of getting LTE speeds I subscribed for One Fusion 10 which, for $10 and valid for a period of 30 days, gives you:

On paper, this is the most attractive mobile product in Zimbabwe would suit any individual or small business team that does a lot of its work on social media platforms. There are other One Fusion products that offer more for a higher price but we decided to get the $10 product since we are always moving in and out of wifi and only need mobile internet for short periods of time.

If you noticed at the beginning of this article I deliberately separated NetOne and OneFusion, I could have said Techzim has been trying out NetOne’s OneFusion but I chose to say NetOne and its OneFusion product, this is because of the experiences I have had so far which I explain in more detail below.

My NetOne experience was not great. I had a lot of people complain they couldn’t get through to my NetOne number on different occasions and at different locations. NetOne to NetOne calls were great but Off Network calling and receiving left a lot to be desired.

There were a few occasions where my phone would be quiet for a good hour and only when I would check on it I would notice there was no service,  I had to toggle Airplane mode on and off to get back onto the network.

When ZESA would go, so would my network. I don’t know if this meant NetOne base stations didn’t have backup power or if it was just a coincidence, but every time heavy rains would fall and ZESA would go, I knew NetOne would follow suit and that was really annoying, usually when ZESA goes is when I would find time to browse through Twitter, Facebook and engage in chats on WhatsApp.

Travelling with NetOne over the Christmas period was also annoying, the Network would fluctuate and I never experienced constant coverage. After consulting with another Techzim team member, they too confirmed experiencing network issues that seemed to have increased for them over the last two months.

My network would drop down to EDGE/GPRS on quite a few occasions which may explain why people couldn’t get through to me so often.

My One Fusion Experience

After subscribing to OneFusion 10, I went about using my device as I would on a daily 250mb data bundle from Econet. I would occasionally check my Instagram, Snapchat, LinkedIn, Twitter, WordPress, Facebook Page (Techzim page), browse the internet using Chrome and watch a quick tutorial or two on Youtube.

My emails stayed on and would fetch after every 5 minutes. All other background processes were restricted to use over wifi as was the case when using my Econet line.

All was well, LTE was handling all my needs and the 800mb mobile data lasted about 2 weeks, remember I am constantly in and out of wifi so the same cannot be said for someone who relies solely on mobile data.

Once my mobile data provision completed, my OneFusion took a nasty turn. OneFusion first used up all my mobile data before it started using the social media bundles and this is what I experienced once it was done:

All of a sudden WhatsApp calls weren’t all going through or coming in. I would open my WhatsApp and see missed calls that weren’t pushed to notify me. On some occasions, I would try to make a call and my WhatsApp would notify me of no available internet connection, even though my chats were actively coming in.

I also had to open WhatsApp to get WhatsApp messages whereas whilst on mobile data I would get push notifications. I would open my WhatsApp and find multiple messages coming in at once with some of them requiring urgent attention at the time they were sent.

I was able to download videos and images though it was slightly slower that Econet. WhatsApp Video calling was also a major annoyance, calls would drop constantly so I completely abandoned using it.

Twitter would refresh and load all Tweets but wouldn’t load images and videos. Only after attempting to open the images a few times would it show signs of being downloaded. I did not try going live on Twitter.

Facebook was by far the best experience out of the three social media bundles, I could watch videos and browse through content with ease. It would load images relatively on time. I’m am not a heavy Facebook user, most if not all my Facebook activity comes from the Techzim Facebook page, and I was able to view all I needed to with relative ease. I did not try going live on Facebook, will do so soonest!

It’s difficult to say yes or no to Net One or One Fusion, in the end, you get what you pay for. What Techzim can advise is to check if NetOne works where you stay or where you work (or wherever you spend the majority of your time), it will only cost you $0.50 to get the line and test the network availability.

If NetOne service is poor in your area its best to stick to what works, the frustration is not worth a few dollars saved, especially if you need to be available to people at all times. Having it as a secondary line is not a bad idea too, you get to use it when it works but solely relying on it could prove to be irritating.

NetOne service is what brings down the OneFusion product, which Techzim still feels is a great product despite a few issues which are to be expected. OneFusion relies on NetOnes network to provide what the subscriber is paying for BUT at the same time NetOne relies on OneFusion to drive its comeback into the mobile network market.

Techzim noticed NetOne improved its customer support and we are often answered in a matter of seconds with what sounds like a professional team in place now. Techzim has also noticed that NetOne is now pushing its OneWallet product with new integrations offering subscribers greater service options, but, without addressing core network issues all the great cosmetic work could go to waste. In the end, the subscriber wants a reliable and consistent network that won’t fail them in their time of need.

18 thoughts on “My one month experience on NetOne and OneFusion”