Technology usage statistics provider GlobalStats announced today that Android has finally overtaken Microsoft Windows as the most popular operating system in the world – in terms of internet usage.

The Google owned but open source mobile operating system  is now the top platform in the world with 37.93% market share of internet usage. Windows is at 37.91%.

This is history making; it’s the first time Windows has lost that spot for as long as people can remember – well, since the 80s. Also it doesn’t look like a spot Windows will regain in the long run. Windows is just not the preferred operating system on mobile. Android is. And unfortunately for Microsoft, the dominant platform for internet usage is increasingly mobile. That trend isn’t about to change. 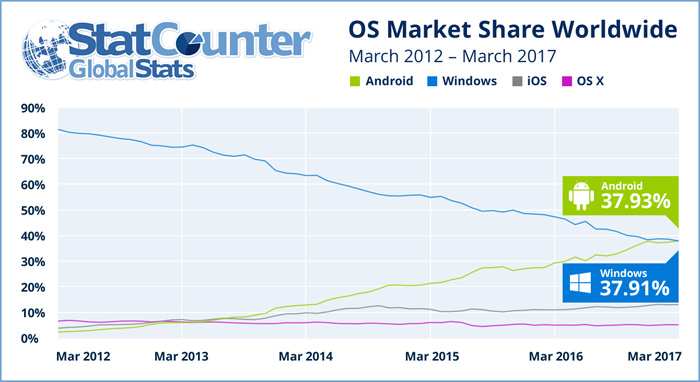 To be clear, Microsoft still however holds top position in desktop operating systems where it’s on 84% of the computers connected to the internet.

How things change: It’s interesting to compare today’s global OS market share to 2010 (7 years ago) when Windows had 91% market share and Android just 0.12%.

What about in Africa?

In Africa all this is not news at all. That history was made almost 2 years ago. Android has been the most dominant operating system in Africa since August 2015.

Today, Android has 44% marketshare of the operating systems in use on the internet, Windows has 35%, Unknown (Asian variants of Android and other Asian OSes) is 8% and IOS is 4% and lastly Nokia platforms at 2.5%.

This makes sense because in Africa, the laptop or desktop has been mostly a company work tool. A pricey work tool. Individuals that don’t need to work at an office, or can’t afford it for school, just use their mobile phone for everything – school, work, casual browsing etc… 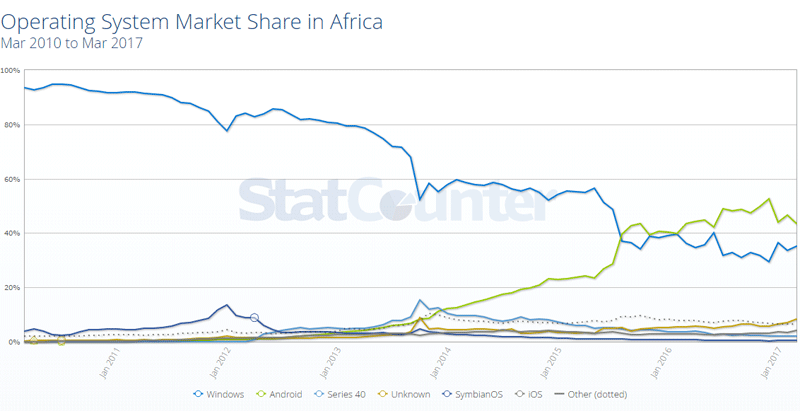 Africa is actually unique is this aspect, or let me just say was ahead in being more mobile than PC. In Asia, a continent that is also primarily mobile, Android became more dominant than Windows in February last year a whole 7 months after it had happened in Africa. Currently, Android has 52% marketshare where Windows has 29% in Asia.

In South America, Windows is still strangely more popular than Android and in fact appears quite strong (56% against 31%).

Internet entrepreneurs in Africa who already have products in the market will tell you that their own mobile/PC usage stats reflect exactly what the GlobalStats data suggests. That they have to align their products primarily to mobile users has been clear for a while now.

In that sense, this data just confirms the obvious. Ofcourse if one’s startup targets enterprise then there’s still a lot of Windows there. But the opportunity with enterprise – on a continent that has issues of business being done on political patronage basis, corruption within companies etc – is a tough one to realise.

The summary really is to create and design products for mobile consumption. PCs are falling, and this is not likely to change going forward.

4 thoughts on “Android beats Windows: Now most popular platform globally for 1st time in history. But not in Africa!”