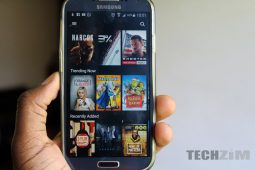 Econet Media, the company behind the relatively new kid on the block in African TV called Kwese, has reportedly signed a deal with Kenya’s largest mobile operator Safaricom.

Safaricom mobile subscribers will have Kwese TV as one of the services offered by the network.

To the best of our knowledge, this is Kwese’s largest network access deal yet with a mobile operator. Safaricom has a total subscriber base of over 26 million in a market of about 37 million total mobile subscribers. That’s over 70% subscriber marketshare! Safaricom also has the most successful mobile money product in the country, called M-PESA.

In short, Safaricom is as dominant in Kenya as Econet Wireless is in Zimbabwe. This comparison is important to draw because, the vision for Kwese TV when it launched was that mobile internet users (98% of all internet users in Zimbabwe) would use their smartphones for TV, and in Zimbabwe at least, Econet Wireless network was the key distribution platform. Unfortunately Kwese has so far failed to secure a license to stream in Zimbabwe – yup, as if Netflix & YouTube are licensed to stream to Zimbabweans.

Anyway, Safaricom is an even bigger opportunity because of the numbers in Kenya. Of those 26 million mobile subscribers Safaricom has, about 18 million are active consumers of mobile internet. This is the size of the opportunity for Kwese TV.

From what we understand, Safaricom will likely create a bundle for Kwese TV content, and subscribers will probably buy this bundle via M-PESA. It’s not clear what revenue model the two companies have agreed on, and how these data bundles will be structured exactly so that; it’s not too expensive for subscribers (unlimited Kwese streaming at a decent price would result in good traction) and that the price makes business sense for Safaricom in terms of the data pushed by Kwese content.

We are seeing increasing integration across our related industries in telecommunications and media. Through our partnership we will be able to leverage our collective strengths to give customers a world-class video service through the fastest network in Kenya. We are excited by the potential that mobile TV offers and look forward to working with Safaricom to deliver our content into the hands of even more Kenyans

Ultimately though, great TV content is what will determine just how big a deal this is. Without great content, the millions of Safaricom internet users will remain an untapped opportunity.

While Kwese’s content arsenal is growing, they face strong established tv streaming competition in Kenya, not least of them ShowMax. But also Netflix, iROKO TV and other smaller ones. In fact, ShowMax was first to ink a TV streaming bundle deal with Safaricom last year, and so, in reality Kwese Media are playing catch up. Showmax also has lots of strong content owing to their relationship with Multichoice, both companies owned by Naspers.

There’s also the competition from YouTube, Facebook and WhatsApp which offer short form video content. While you could argue that the music videos and 5 minute clips on these services make for an oranges and apples comparison, it’s worth mentioning that at the end of the day the battle is for the time of the user. Subscribers only have so much time in their 24 hour day, and time spent watching short funny clips on WhatsApp is time not spent on Kwese TV.