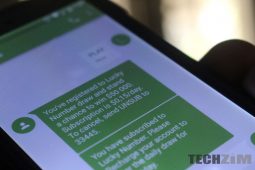 Using SMS, subscribers will make an entry for 15 cents a day for a chance to be the daily jackpot winner who gets $50,000 or, if there’s no jackpot winner, be one of several people who match only some of the lotto ticket numbers.

There’s an interesting twist to this lottery though; the ticket number is the last 7 digits of the subscriber’s phone number. This means the players don’t get to choose the lotto numbers. We’re guessing this makes it very easy to play for the ordinary person, but will probably not attract the hard core gambler who may want to choose specific numbers that he dreamt or were prophesied at church.

How will this work exactly

According to Telecel, those wishing to take part in the promotion have to send the word “PLAY” via SMS to 33445 which subscribes them to the lottery for 15 cents a day. This is a subscription with Telecel for them to deduct 15 cents daily for the duration of the promotion. Ofcourse one can cancel anytime by sending UNSUB to the same number.

Daily, a winning number is randomly drawn by Telecel. We’re guessing that it’s really any 7 digit number between 0000000 and 9999999. That number, if it belongs to anyone that played (it has to match in the exact order from right to left) makes the player a $50,000 winner.

If the drawn number doesn’t belong to anyone that played, players who match six, five, four, three or two numbers get a chance to win some consolation prizes as follows:

The mobile provider is looking to cash in on the betting craze in Zimbabwe which has seen lots of Zimbabweans frequenting betting houses for a chance to get a windfall. This promo is meant to make lotto type betting conveniently available to ordinary mobile phone users.

It’s potentially a good revenue earner for Telecel as betting is driven more by impulse and an irrational belief that the chances of winning are really high, than it is by the reality of the odds. The fact that once subscribed, a user is in until they opt out, is also good for Telecel as it means that subscribers don’t have to decide daily if they really want to play or not. The impulse decision is made once.