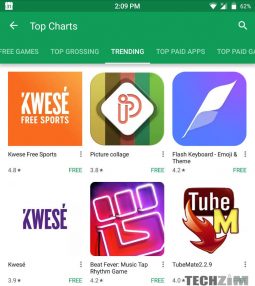 There were just over 3,000,000 apps on the official android app store as of June 2017 and thousands are being added daily, some of them being utter garbage. If you often try out new apps you no doubt have come across terribly coded, constantly crashing, battery draining abominations and sometimes they would appear at the top of the charts or search results. Google is rectifying this.

In the past app ranking was mainly by popularity, i.e downloads and so some developers were fooling the system by fraudulent downloads which were not by end users. Google responded by taking into account user engagement in ranking apps, games especially. This meant the aggressive marketing and tricking of users to download apps which was prevalent, making for high install counts, would no longer achieve the goal of higher ranking on the charts.

User engagement, retention (how long you keep the app installed) and star ranking became much more important than simply the download count. So those apps you were tricked into installing and you uninstalled within the hour would no longer get a boost in their ranking. This then made the quality of the app matter and low quality apps would rank so low that no one besides the developer would even see the app on the store. At least that was the hope.

Google has tweaked the ranking algorithms even further to ensure bad apps are ranked so low as into oblivion. This then means developers now have to make sure their apps are stable (do not crash), perform well and are consistent. So you local developers better take notice and put in the work accordingly.

For end users like ourselves not much will seem different but we will get to install better quality apps. Hopefully. Are the algorithms foolproof? Not likely, but on the whole we should be seeing higher quality apps as these will be more visible than the bad apples making for a better experience on the play store for everybody.