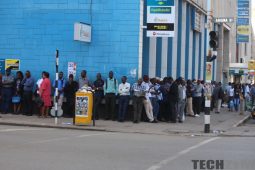 Earlier this year we carried out research that showed that there are at least 5.2 million users of WhatsApp in Zimbabwe. That means around 33% of the population uses the platform. The proportion is much higher in urban centres and accordingly lower in rural areas. With so many people on the service, organisations can and should utilise it to better serve their customers.

That is exactly what the Central Jakarta Immigration Department in Indonesia has done. They introduced a new registration management system where passport applicants can reserve queue numbers via WhatsApp. This is meant to cut on long queues and prevent middleman behaviour (illegal selling of queue numbers.)

To get a queue number one simply sends a message with their details; name, ID number and date of visit. A reply will be sent advising them when they can come in. Applicants then need to show up 30 minutes before the scheduled time. How efficient is that.

Now on to Zimbabwe. The title says banks but our own immigration department can use a similar system and indeed any other organisation from any industry. Banks just happen to have a current extreme problem with long queues. People are having to file for upwards of two hours. We all now know of a certain multi-purpose kitchen tool pitched at said queues by some funny characters.

Imagine having to arrive ‘just’ 10 minutes before your scheduled time and withdrawing your $20. That would be swell, wouldn’t it? Banks can adjust the 10 minutes as they have a rough idea of how many people they can serve in a given time. If they know they have slow tellers like _____ Bank they can adjust it to 20 minutes for example.

It should not be hard to implement. For a bank branch that takes 2 minutes on average per customer and has 4 tellers it means they serve 20 customers every 10 minutes. Knowing that, they can schedule 20 people at 8:00 am and 20 more at 08:10 am and so on.

Customers would have to show up to the bank at least 5 minutes before their scheduled time. This minimises the chance that tellers would have to wait for new customers if they were faster than normal in serving customers. The bank would also need to allow for abnormal slow downs, caused by complicated transactions that need manager approval for example.

What about those users who are not on WhatsApp?

It would not be fair to leave them out and so banks could also implement an SMS registration system to supplement the WhatsApp one. With SMS being more expensive to use than WhatsApp it would still not be fair on non WhatsApp users. There might not be a system that is completely fair. If it is an SMS system only that would be better on fairness but not on pockets.

What about unscheduled walk-ins?

The biggest issue however is what would be done about walk-in customers that did not schedule via text. For a bank branch like the one discussed above they could leave 6 minutes between scheduled groups to cater to walk-in customers. For example they could schedule 20 people at 08:00 am then another 20 at 08:16 am. They would serve the 10 scheduled customers first, which would take 10 minutes then serve the walk ins for 6 minutes.

When the clock hits 08:16 am then they go back to serving scheduled customers and so on.

Of course there would be further considerations if such a WhatsApp registration system is to implemented. The cost is a good example and so is system failure procedure. For our immigration department the job is much easier than that of the banks. The system already works for an immigration department in Indonesia.

Considering all this, do you think such a system would work? Would it be successful in growth point branches or just in major urban areas? Do let us know what you think in the comments below.