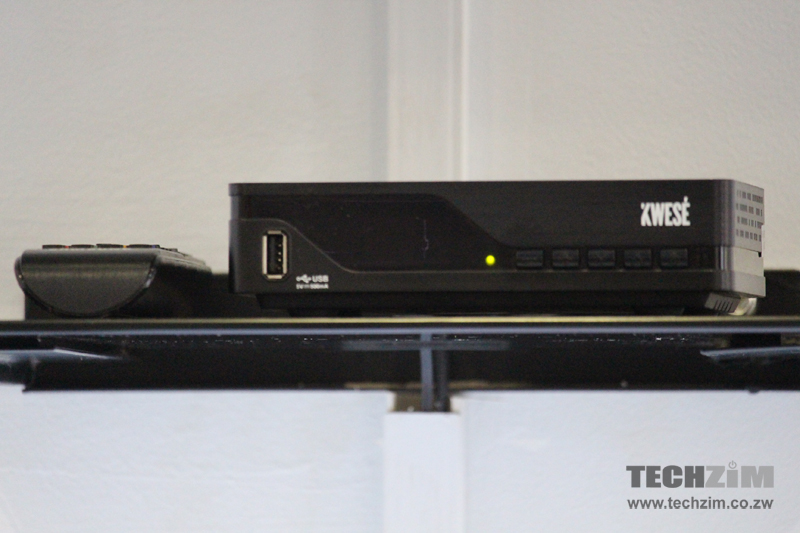 1. The operation of the purported termination of • Applicant’s Content Distribution Service License Number CD 0004 through a letter dated 22 August 2017 signed by Second Respondent on First Respondent’s letterhead be and is hereby suspended.

2. Applicant shall be entitled to enjoy the full rights and benefits of its license as if the said letter of 22 August 2017 does not exist.

3. Applicant shall be entitled to distribute the Econet Media Limited (Mauritius) content based on the technical standards notified by the Applicant to the First Respondent and accepted by First Respondent on 21 October 2016.” The facts giving rise to this urgent chamber application can be gleaned from the applicant’s founding affidavit and summarised as follows.

The applicant responded to this letter by way of a letter dated 16 October 2016 in which the applicant explained that MYTV Africa (Dubai) (“MYTV”) had lost its content rights over Zimbabwe and as such it had secured a new partner in Econet Media (Mauritius) (“Econet”).

Econet would take the place of MYTV Africa as the content supplier. The applicant was in the process of mobilizing funds from Econet with which it would pay off its outstanding license fees. Services would resume in December 2016.

The applicant avers that on 22 August 2017, four days after the payment of the outstanding arrears in license fees and ten months after the applicant had shown cause why its license should not be cancelled, the first respondent delivered two letters to the applicant.

The first letter acknowledged receipt of the sum of US$434,000, 00 towards the clearance of outstanding arrears. It further advised that the Authority would apply the payment towards the outstanding arrears as at 16 October 2016 and refund the balance to the applicant. In the other letter the first respondent advised applicant that its license had been cancelled with effect from 22 August 2017.

The letter indicated that the cancellation was in terms of s 16 (1) (d) of the Act. The reason for the cancellation was that applicant had ceased to provide the MY TV Africa service as specified in the license. The applicant avers that there was no evaluation of the reasons given by applicant for failing to distribute content belonging to MYTV.

Aggrieved by the sudden turn of. events, the applicant filed the present application seeking interim relief suspending the operation of the respondent’s letter dated 22 August 2017 purporting to cancel applicant’s license.

Secondly, the respondents contend that the technical standard and service which applicant was licensed to provide was the MYTV content. The applicant has never sought and was never granted an amendment to clause 1 of the terms and conditions attached to the license number CD0004 to provide Econet Media (Mauritius) Kwese TV Content in lieu of MYTV Africa.

Instead, applicant has sought to smuggle and sneak in an amendment to clause 1 by proceeding to notify the first respondent of changes under s 17 of the Act by way of a letter dated 18 August 2016. Rather, the applicant ought to have proceeded by way of an application for an amendment of its license under s 15 of the Act.

The respondents point to a prior attempt by the applicant in 2014 in which applicant sought to amend the license. On that occasion, applicant was advised to use certain forms for that purpose. The respondent contend that were notifications in terms of s 17 be sufficient to effect amendments to licenses, then s 15 of the Act would be redundant.

In any event the first respondent contends that it never accepted the notifications as such but merely acknowledged receipt of the same hence the documents relied upon by the applicant do not carry any signature by any of the first respondent’s authorized signatories.

The first respondent relies on applicant’s earlier submission of an application to amend clause 1 of Part B of the terms and conditions of the license in terms of s 15(1) (c) as read with clause 13.1 of the Schedule to applicant’s license.

To enable it to provide Blue Ocean Satellite Television (BOSTV) content/channel as an indication of applicant’s acceptance of the fact that amendments to the license are done in terms of s 15 rather than s 17 of the Act.

Consequently, the applicant failed to effect the amendment to its license in terms of the law. In the circumstances, the license remain liable to cancellation for failure to adhere to the agreed terms and conditions.

The first respondent avers that it had responded to that earlier application in 2014 by way of a letter dated 14 June 2014 advising applicant to make its application through the prescribed form BS1 and to pay the outstanding license fees. For two years, the applicant did not respond.

Because the applicant did not respond during that time, the first respondent issued a notice of intention to cancel the license on 12 October 2016. Applicant’s argument that it applicant notified the first respondent in terms of s 17 of the Act that it was substituting MYTV for Econet Kwese TV content ought to be found to be inconsistent with applicant’s earlier request to amend the license to provide BOSTV above the source of the right is immaterial. The applicant, as a holder of a licence duly granted by the first respondent ought to have drawn this court’s attention to the 2007 amendment to the Act which provides:-

(a) to ensure efficient use of the broadcasting service bands; and .

(b) to encourage the establishment of a modern and effective broadcasting infrastructure, taking into account the convergence of information technology, news media, telecommunications and consumer electronics; and

(c) to promote the provision of a wide range of broadcasting services in Zimbabwe which, taken as a whole, are of high quality and calculated to appeal to a wide variety of tastes and interests, providing education, information and entertainment; and

(d) to ensure that the broadcasting services in Zimbabwe, taken as a whole, provide—(i) regular news services; and (ii) public debate on political, social and economic issues of public interest; and (iii) programmes on matters of local, national, regional and international interest or significance; so as to foster and maintain a healthy plural democracy; and

(g) to ensure the application of standards that provide adequate protection against—(i) the inclusion of material that is harmful or offensive to members of the public; and (ii) unfair treatment of individuals in television or radio programmes; and (iii) unwarranted infringements of privacy resulting from activities carried on for the purposes of television or radio programmes; and

(h) to ensure that broadcasting licences adhere to a code of conduct acceptable to the Authority. (2) The Authority, the Minister and all other persons required or permitted to exercise functions under this Act shall pay regard to the objectives set out in subsection (1) when exercising those functions. [Section inserted by section 3 of Act 19 of 2007]”

In terms of s 2A (2) of the Act, the Authority, the Minister and all other persons required or permitted to exercise functions under the Act are obliged to pay due regard to the objectives set out in subsection (1) when exercising those functions.

The whole conduct of the Authority in this saga leaves no doubt in one’s mind that this matter was not properly handled nor were the purposes and objectives prioritised with regard to the applicant. In my view the applicant has demonstrated that it has a prima facie right such as is required in an application of this nature.

(b) Whether there is a well-grounded apprehension of irreparable harm

This is due to the fact that, as a clear right still has to be proved, it may be that a clear right cannot be proved and the interdict may be discharged on the return day. The interim order will only be granted if, by not granting the relief, it will be very difficult, if not impossible, to restore the status quo ante.

The applicant publicly announced that it was rolling out its broadcast service through the provision of Kwese TV content. Clearly, applicant has invested heavily in both human and capital resources for which a huge loss will naturally follow should the Board refuse to reverse second appellant’s letter of cancellation.

What is required to be established at this stage is not whether the applicant acted within the law in incurring those expenses but whether it will suffer irreparable harm should the interim relief not be granted.

It seems to me that it is, at this stage, immaterial whether applicant brought such consequences upon itself or not; the inquiry is whether, as a fact, should the interim relief not be granted, applicant will suffer irreparable harm. I am satisfied that indeed such irreparable harm would visit the applicant.

(c) Whether no alternative satisfactory remedy available to the applicant

This is linked to the previous requirement, namely that in addition to there being a reasonable apprehension of irreparable harm, there must also be no alternative satisfactory remedy available, such as a claim for damages that would adequately compensate any loss.

Mr Nyambirai, for the applicant, urged me to find that in the application for a review of the decision that is sought regarding how the decision to cancel was arrived at, applicant will demonstrate that it was denied fair administrative justice.

He went on to elaborate how applicant was led down the garden path and in the end suffered the ignominy of cancellation by the second respondent when he had no power to make such a decision. The applicant contends that at this stage the only avenue open for it is the grant of an interim order

(b) act within the relevant period specified by law or, if there is no such specified period, within a reasonable period after being requested to take the action by the person concerned; and

(c) where it has taken the action, supply written reasons therefor within the relevant period specified by law or, if there is no such specified period, within a reasonable period after being requested to supply-reasons by the person concerned.”

Clearly, the applicant is entitled to challenge such an arbitrary exercise of power by an administrative authority.

The court may also take into account the applicant’s prospects of success in relation to whether or not it is likely that the applicant will ultimately be able to show a clear right; as well as any potential prejudice to third parties..

In doing so the court takes into account all the relevant factors put forward by both the applicant as well as the respondent. The applicant has shown that its prospects of succeeding in establishing a clear right in the main matter are bright.

The problem is not the subscriber’s creation nor did they knowingly contribute to it. In my view the balance of convenience favour the granting of the relief sought.
Consequently, the application succeeds. It is therefore ordered as follows:
Pending the final determination of this matter it is ordered that:

1. The operation of the purported termination of Applicant’s Content Distribution Service License Number CD 0004 through a letter dated 22 August 2017 signed by Second Respondent on First Respondent’s letterhead be and is hereby suspended.

2. Applicant shall be entitled to enjoy the full rights and benefits of its license as if the said letter of 22 August 2017 does not exist.

How to get a Kwese decoder. Read Here

9 thoughts on “Here is the ruling for Kwese TV”