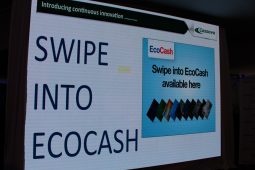 Innovation is always a good thing, even better when it addresses the real problems on the ground (not sure though if something is still worth being called an innovation if it doesn’t).

Anyway, EcoCash recently launched its latest innovation, Swipe into EcoCash. The innovation has so far been met with different responses though most seem to be positive. However, some seem to be having mixed feelings and it’s for that particular group of people that I’ve compiled this – well, those and anyone else really tbh.

So the first and obvious question would be:

If you bank with Barclays, Standard Chartered etc. and are a heavy EcoCash user (which makes most Zimbabweans considering over 80% of e-transactions are on mobile money and over 98% of those are on EcoCash), you’re likely amongst the many who rejoiced and probably still are after hearing about the Swipe Into EcoCash innovation.

So good for you guys, now you can enjoy the convenience that the ‘rest’ have been enjoying.

3. People who use EcoCash plus any other mobile money platform

4. Ultimately everyone – more POS machines in the system

So since the innovation depends on a Point Of Sale (POS) machine, it only makes sense that EcoCash in one way or the other makes provision for some extra. For now, the SIE (allow me to call it that from now on, typing is hard work!) only works at Steward Bank POS machines. However, EcoCash promised to enable the service on more POS machines.

But here’s the catch for everyone else, whether you need the SIE service or not, EcoCash promised to add more POS machines into the system. I am pretty sure that these POS machines won’t just be for SIE otherwise that would be some serious underutilisation of resources. So the POS machines will likely be rolled out to those Agents who are also merchant so they can multitask using the machine. It’s a no brainer how good this is for the rest of us given how dependent we now are on electronic transactions due to cash shortages.

With that been said, the next question is:

Apart from haters always going to hate hate hate, yes there are still some concerns especially bearing in mind that the idea is not only meant to allow all banks to be ‘linked’ to EcoCash but ‘to replace the need to integrate with ZIPIT’. So now what are those challenges?

1. The transfer is one way

For starters, its good for us to know that customers whose banks are integrated with EcoCash can transfer their money from the bank to their wallets and vice versa.

Swipe Into EcoCash as the name suggests, is a swipe into EcoCash facility (had to dump the abbrev just make this point). It doesn’t swipe out of EcoCash, by that I don’t mean it like the usual withdrawal since that’s the job of the EcoCash debit card, but rather I mean moving funds from your EcoCash wallet into your bank account. I know some might be wondering the use of moving money from EcoCash into a bank? Well, you will never know it until you encounter a situation that needs it, only then will you remember I said it!

2. Transaction depends on the availability of a POS machine

So unlike with those whose banks are integrated with EcoCash, those depending on SIE will have to have a POS machine and an agent at their disposal before they can transfer their funds from a bank account into the EcoCash wallets. So now comparing with that, it then makes sense for those who only have the SIE service as an option to feel robbed.

Also, even if we’re to compare with the other mobile money platforms that is Telecash and OneMoney which are integrated with ZIPIT, this is innovation does not provide the best of convenience. With Telecash and OneMoney you can completely send and receive money in the comfort of your own home or anywhere else really whenever need arises. However with SIE, that’s a different story…

3. You can only swipe into your own EcoCash wallet.

That’s a major bummer if you ask me.

But then again, already whether your bank was integrated with EcoCash or not, you were (rather are since it’s still the case) only limited to sending money to and from your own accounts. So yes, I was expecting a ZIPIT integration or an innovation that allows me to send money into any account in just a single transaction. It not only saves time, but a few cents too #cheapskate.

Now your turn: What’s your take on Swipe into EcoCash? Does it address your major concerns or not???

13 thoughts on “How effective an innovation is Swipe into EcoCash???”