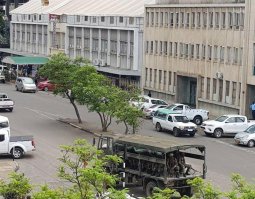 Recently, the number one issue which made journalists from outside Zimbabwe call Techzim for a comment has been Bitcoin. Why? Bitcoin was (and still is) trading at a premium in Zimbabwe. On Tuesday the 14th of November 2017 the rate of Bitcoin against the USD in Zimbabwe was almost twice that of the international rate.

Tuesday was two days ago, in Zimbabwe right now two days is a long time! Yesterday (Wednesday) we woke up to a news broadcast from one, Major General Sibusiso Moyo announcing that Zimbabwe was not experiencing a coup d’etat. When a decorated soldier guy suddenly shows up to reassure you that there is no coup you kind of believe that he is speaking in opposites, we used to do that as kids.

Does this affect how Bitcoin trades in Zimbabwe? Let’s look at why Bitcoin is trading at a premium in the first place:

We all know the story here. Zimbabwe’s currency the Zimbabwean Dollar was ‘de-monetised’ way back in 2009 and we officially started using multiple currencies. On paper this meant that as long as you had anything that was considered money in any corner of the world you could walk into a shop and buy goods and services. Effectively however, Zimbabwe started using the United States Dollar.

Things started working fine until the wheels came off. When the multi-currency regime came into play, Zimbabwe was under an inclusive government and this government had fiscal discipline. The then Minister of Finance, Tendai Biti was always quoted as saying, “We should eat what we kill.” If ZIMRA collected five bucks in tax revenue then the government would budget within that five bucks whether or not hospitals needed to be built or civil servants wanted a raise unless money came from someone else and it did come from donors such as UNICEF for specific projects. Incomes and prices therefore remained stable, in fact Zimbabwe started experiencing deflation.

2013 came, elections happened, the inclusive government went out of the scene, restraint on government expenditure flew out of the window. The economic blue print presented soon after that election (ZIMASSERT) actually showed that the government was hungry to eat what it had not killed but only hoped to kill but realistically could never be able to kill. Civil service wage bill increased as raises came and the workforce itself was expanded. Deficit budgeting came back in a big way. At the same time the then Minister of Finance, Patrick Chinamasa hoped to re-engage multilateral donors and started paying off part of what Zimbabwe owed them.

The Downside of Using USD

Added to this crazy fiscal indiscipline was the predicament that Zimbabwe with a crippled industry was using a strong currency that has high demand across the world. Result: goods from all over the world were now being dumped on the Zim market whilst the USD flew out.

How did the government finance this? First it was probably the undocumented diamond money (just a bit of it, most probably went to the few privileged). After that they started delaying paying institutions like Medical Societies whatever they would have deducted from civil servants’ payslips. From this point on we all know what went down. Bond Notes which were claimed to be at par with the USD but in the same breath being defined as a non currency were introduced.

Our money in bank accounts was now being raided whilst we were given the notes of bondage whenever we made a withdrawal from the bank. In no time, even the bond notes themselves were not as accessible. Money in our bank accounts was reduced to know money. You can’t withdraw as much as you want and increasingly you can’t make payments outside the country as bank upon bank began to stop the use of international payment cards like VISA and Mastercard.

This is what brought in the Bitcoin to prominence. In the Bitcoin, Zimbabweans could store their money in some other form other than for it to be chewed up by the moth and rust of high rate in their bank accounts. Bitcoin made it easier to move money outside Zimbabwe for example to buy cars on Be Forward which started to accept Bitcoin.

Bitcoin brought new opportunities for Zimbabweans in the diaspora to remit to their loved ones back home without having to worry about whether they will get fair value from the official remittance channels. The demand for Bitcoin rose. Market forces being the way they are, the price of Bitcoin responded to meet a higher average demand in Zimbabwe than the rest of the world. Zimbabweans could not afford the luxury of skepticism when it came to crypto currencies particularly Bitcoin.

Well it depends on the now and the what: what will the military do next? If they establish a strong and accepted transitional government, Zimbabweans are ready to hope again. When there is hope, there is no rush on the bank. The demand for Bitcoin will slow down a little and market forces will behave as expected and the price of Bitcoin in Zimbabwe will go down towards the international price.

Can Bitcoin get to be priced less in Zimbabwe than internationally?

Assuming a strong transition government, international community will probably be ready to invest in Zimbabwe again. Money may start flowing more easily through our banking system again. This will increase if the transition succeeds in handing over to a democratically elected government.

If this happens the skepticism that Zimbabweans could not afford will become affordable. People will start asking themselves if they know enough about Bitcoin to have an appetite for it? There won’t be an urgent need to preserve value for their hard earned money. This may result in more people seeking to sell Bitcoin than those who want to buy and the price may tank.

This is not likely

To follow the daily price of Bitcoin in Zimbabwe and internationally, we prepared a Bitcoin resource for you

One thought on “Bitcoin has been trading at a 100% premium in Zimbabwe, will it continue to do so if things change after the military takeover?”